Liberty Ross, about Snow White (Kristen Stewart) after having discovered the actress had cheated on her beau Robert Pattinson with her husband, the director of the film "White Snow and the Huntsman", Rupert Sanders.

A paparazzi was following Kristen Stewart, she had just finished her workout at the gym and was on her way home, everything seemed to end up with a random photograph.

However, somebody phoned the actress and Stewart changed her direction immediately, so strange it seemed that the photographer followed her and then a simple picture turned out to be the great exclusive of the summer.

Kristen Stewart was having an affair with Rupert Sanders, eleven years older than her, married, father of two children and the director of her film "Snow White and the legend of the Huntsman". Welcome dear reader to the true and dark world of Hollywood!!! Updated version Snow White Kristen Stewart Read this in Spanish Kristen Stewart


At that moment, Kristen Stewart was an icon, and the envy of many girls in the world as she was dating one of the most handsome and talented actors in the planet, Robert Pattinson, but she was having a torrid romance with the director of her last film Snow White, Rupert Sanders.

Pattinson has left the home he was sharing and bought with Kristen Stewart in California and now is resting in the home of the actress Reese Whiterspoon, he is going to appear in public in a week although is no clear whether he will talk about the matter.
Robert Pattinson is devastated and do not want to forget  what Kristen Stewart has done, Stewart is now depressed and begging Pattinson for forgiveness. Indeed, it is said that Stewart has not washed herself in a week as she is horrible sick.

Does she really want to be back with Robert Pattinson? Why do they play such cheesy romance movies as Twilight when they are playing filthy soap operas with their lives? Why did not Kristen Stewart play the role of Evil Queen?.

When the photos had just appeared, many fans of Kristen Stewart defended her telling that everything could have been fake, yet Kirsten Stewart wrote a note of apology soon afterwards saying she was deeply sorry hence all the doubts were irremediable cleared.

Note of apology from Kristen Stewart
"I'm deeply sorry for the hurt and embarrassment I've caused to those close to me and everyone this has affected. This momentary indiscretion has jeopardized the most important thing in my life, the person I love and respect the most, Rob. I love him, I love him, I'm so sorry" 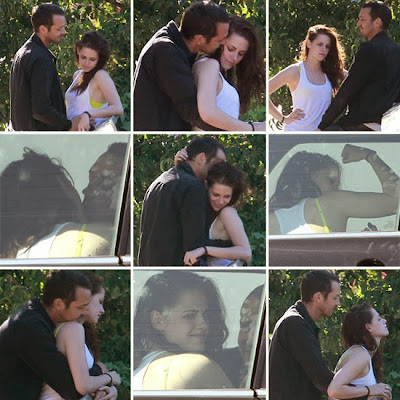 Kristen Stewart having an affair

The new Twilight film is to open worldwide in a couple of months, Will this affair affect the franchise? Will Robert Pattinson and Kristen Stewart appear together?. It is only a matter of time for us to know. The note of apology comes as no surprise as the future of the Twilight and the box office is in peril.

Meanwhile, the director of the film Rupert Sanders has also written a note of apology as he is married and have two children with the model Liberty Ross. Nevertheless, no many people talk about it as he is not so famous as the two youngsters
. 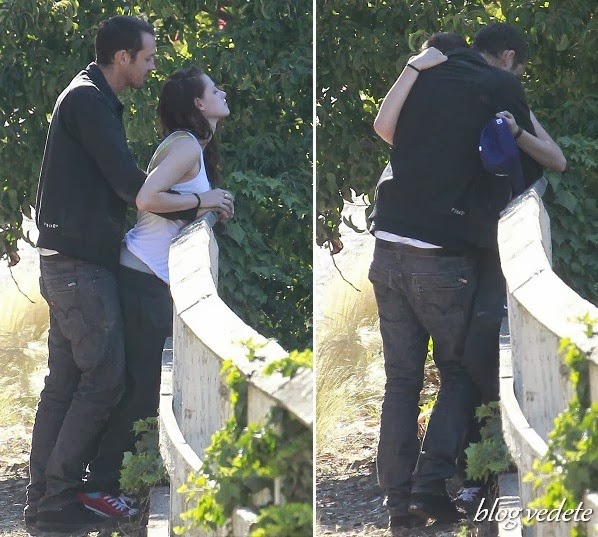 
Liberty Ross had recommend Kristen Stewart to her hubby as she was such a great artist, something we do not know if she still believes, she even appear in the film playing the role of the mother of the evil Queen (great Charlize Theron in her role), they even went out together at the premiere of Snow White, little did she know at that moment  how good times were having her husband and father of her two children with the actress Kristen Stewart.

The first thing Liberty Ross did when she heard of the news was writing on her Twitter account "Whow". Later on, she wrote a quote from Marilyn Monroe which says "Sometimes good things fall apart so better things fall together" As whether she was going to leave her husband. The following morning she put a picture of Snow White very drunk which you can see at the beginning of this post with the sardonic sentence."Not so pure not so pretty after all". 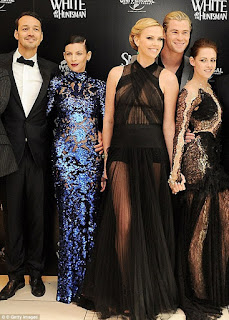 
(Liberty Ross and Kristen Stewart. At first, Ross admired Stewart, later they became friends and finally they have shared the same man).

Liberty Ross is a British model who was discovered by the photograph Mario Testino, she has  appeared on the cover of fashion magazines such as Vogue, and modelling for important brands such as Burberry, Chanel or Dior. Her brother won an Academy Award doing the score of the movie "The Social Network" with the talented Trent Reznor.


Liberty Ross and Rupert Sanders are wealthy, they have several houses, they have two children and great careers. Kristen Stewart and Robert Pattinson are even richer, Kristen Steart´s wealth is 55 million dollars, while Pattinson´s is 40 million, they are much more famous and successful and they are much younger.

What these privileged people are doing is really awful in the hard times we are living. Next time you go to a cinema do not watch them so sweetly nor warmly they do not deserve much, we as ordinary film goers deserve better. As a matter of fact, Kristen Stewart and Rupert Sanders has lost the respect of Halcombe Hackney Norilsk

Charlize Theron is not so evil after all 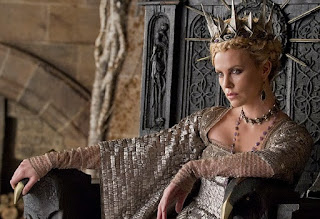 As far as the movie is concerned, Snow White and the legend of the Huntsman makes the debut of Rupert Sanders in Hollywood, he had never done a long movie there. I do not know why but this old tale is really popular nowadays, some months ago it was a version with Julia Roberts, it will be another very soon with Angelina Jolie and two mediocre movies has also been made this gracious year.

The most important to date is this Snow White and the Huntsman whose Evil Queen is really good played by the extraordinary actress Charlize Theron, she is the best of the movie, the really only worthy issue of the flick is the South African actress playing the role of the Evil Queen.

She is by far the best of the movie which is no really good, and even though the fame Kristen Stewart has, she has not played a great performance, the movie is nothing special, but at least, Kristen Stewart met Rupert Sanders, they have had great times together and they have made rich an anonymous paparazzi who is the only one in this story laughing out loud. .

MIRROR MIRROR ON THE WALL, WHO IS FAIREST OF THEM ALL? (Do not panic Charlize, even though you do not like the Hormiguero, we still believe in Spain you were the best in the movie) Kristen Stewart
Posted by Halcombe Norilsk
Email ThisBlogThis!Share to TwitterShare to FacebookShare to Pinterest