It was the year 2004 and I found myself enrolled in a course to learn how to write a screenplay, the best was going to be shoot and one I had penned was selected to be so, I read it in front of the other classmates in the middle of one lesson and the teacher chose it. As there was a shortage of money and no plenty of ways to make it the screenplay must not be too complicated. The story I wrote it was only an introduction to a character it had not even born yet, nevertheless, the short movie does exist today and that story has never been fulfilled. No a single actor was known to me thereby I called on one my friends David Escribano to star it as I believed he was brave enough to do it and the only person around me who was going to be fearless something that was true in practice. A peculiar thing was that back then I would be watching plenty of movie classics starred by Marlon Brando, I saw many of them and a particular one called "A streetcar named desire" inspired me in such a way that I told David Escribano to wear a white T-shirt to pay homage to him. What is more, I even bought it myself but that T-shirt was never in my customs again as it was converted into rags to clean dust. Anyhow, some months later Marlon Brando did pass away. Coincidence? 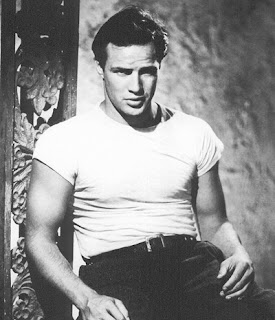 Marlon Brando
(I was inspired by his famous character in the movie Streetcar named desire based on a play by Tennessee Williams, Marlon Brando died after the short movie was concluded)

Short movie Angustia (Spanish) Anguish (English) Nerimas (Lithuanian) was shot in two dissimilar places. Firstly, it was attempted to in a particular house in Zaragoza, (There are two versions on Youtube of this short movie, one of them can be watched later on, the original one contains a song from a famous Spanish rock band, there is also a deluxe version on DVD format as you can see below, only 5 copies were provided thus if you have one you must keep it safely as in 100 years' time it will be most valued than gold, water and oil combined) the second day it was recorded in a rural place in Moncayo (an Aragonese natural park). The teacher was a professional who had been working with Bigas Luna, a famous Spanish filmmaker now dead. 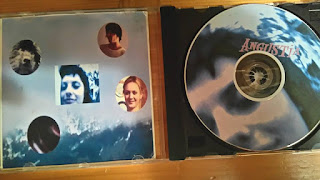 Personally, it was far too much harder to edit it than shooting and even writing, even though I was not directly in charge of directing it on the credits it is said so, the teacher was the main director, after all, we were merely students. We edited it at class and I wrote it on my home. We have to praise all the actors, David Escribano for instance, is an engineer lacking artistic skills but he does what it takes. He is the bad guy of the story, isn´t he? Main female protagonist was an outstanding girl named Elena who was fluent in French and had somehow tried something in the world of acting something which was visible, she is the one who renders a great performance, I told her she ought to learn from Julianne Moore because at that time the latest movies of her were interesting as this actress was nominated twice in the same edition of Academy Awards in such good movies as "Far from Heaven" and "The Hours", Julianne Moore was everywhere back then with superb works in both flicks. Even so, she has not been able to win the Oscar until recently. Beauty of Elena is notable as the beauty of her nemesis a wonderful Lithuanian girl named Neringa (both names Elena and Neringa were omitted on purpose on the first version of this story written in Spanish just in case but I think now it is fair to remember them you can read the original version now Original version)  Prettiness aside, both girls were amazing, a blonde one and a brunette, more than perfect as a result. Neringa told us about her days working as a fashion model, her height was imposing I think she was 180 centimetres (5'11 feet), she came to us like an angel in the sense a roommate of our friend Jorge left the house and the first person to answer the vacant notice was her. Just when I was thinking about who could do her role I entered the house and there she was, like an utterance from the gods!!! As a matter of fact, Neringa was so skilled that she abandoned Zaragoza subsequently in order to study in Madrid, she started something related to politics, she had a perfect command of Spanish and she explained us how was the Lithuanian for Angustia, Nerimas, something you would have guessed reading the title post although in Spanish Angustia is also a personal name. A funny anecdote to tell of was when Elena and I were working the script, Elena was so professional an exceptional that everything was easy with her, she acted perfectly, was brilliant indeed. We went to see Neringa to choose some clothes for her to act, it was funny because she had Dior clothes to wear on it, yet her role was to act like a housemaid. Nonetheless, everything is no perfect as the other actor involved (even though he was a fantastic guy and pretty funny) he did not make a good impression as an actor in the sense he was extremely nervous (but there are people who like his performance regardless) he was too worried to act adroitly. Short movie Angustia, Anguish in English, Nerimas in Lithuanian was shot in 2004 and I remember that the first day it coincided with the wedding between current Kings of Spain, the second day it was shot in a rural place in Moncayo mountain, that day was good fun, it was a great experience and it is always wonderful to see how a story you have envisaged in your imagination and wrote thereafter remains in images forever. However, the filmmaker (the teacher on this particular occasion) chooses what does he want hence it is impossible to see a piece of writing just as you have imagined it. The best thing on this short movie? Treatment of the song "Mañana será igual" (tomorrow it will be the same) from legendary Spanish rock band Barricada (barricade), it is a wonderful song, yet this band does not usually play it live. I sent several emails to members of this rock band telling them I was going to use their song, one person from the band answered me saying thanks and talking in the name of the musicians (Youtube and musical companies know for sure how to exploit the intellectual property) this song ends the short movie. Personally, I feel a little bit embarrassed but if the male protagonist does love it and the rest do not mind me writing about it as some love the story let´s see short movie Anguish, Angustia, Nerimas!!! based on a trilogy written by Halcombe. I take advantage and I extend my deeply gratitude to those who appear on this short movie. Lastly, I must admit I paid the intellectual fees to exploit the story, something I had forgotten until recently. Enjoy!!!