After being in several restaurants and adjusting ourselves to the state of Ontario and the country Canada we finally found the place that was going to be our daily eating destination, City Kitchen, Restaurant and bar downtown Toronto, we had to work everyday on Eaton Centre, in the heart of the most populous city of Canada, dinner was already assigned in other restaurant near our hotel and after met a nice waitress who explained to us the distinctive features of baseball and North American football and being allowed to watch the European basketball final between Lithuania and Spain we chose City Kitchen as our favourite place and the experience was very positive as you can guess reading the following. 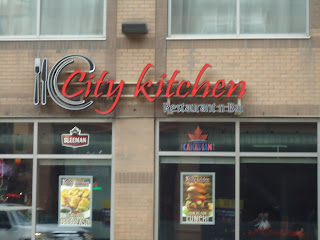 Being from a rural place of Spain means food is very important more than in the city where everybody is in a rush. What is more, it is very easy to end up eating fast food in North America something that pundits do not recommend and I am not used to it, this is one of the positive reasons to having eaten in City Kitchen everyday as the menu is really diverse, assorted with numerous dishes, indeed, I really believe I tried something different almost everyday and I even tried almost everything, we were 60 days more or less working in Toronto thus I think I can assure it. All the workers labouring at City Kitchen are very nice, albeit we must point out our predilect waitress Linda who always makes sure you eat properly and everything is accordingly 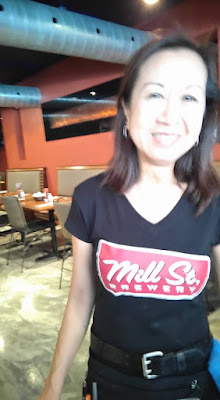 Those days it was an unusual craziness for baseball as the local team Toronto Blue Jays had made an incredible season beating records and reaching the last stage of its baseball division, known as Baseball World series but the staff is so diligent that they respected our preferences allowing us to watch European soccer instead. The building is really fancy and the ambience is great on City Kitchen, there are young waitresses, some good bartenders from Ireland and even the managers treat you well. In fact, they gave us free drinks sometimes. Furthermore, prices are no so high as you are in downtown Toronto (fourth biggest city in North America only behind Los Angeles, New York City and Mexico City) close to financial centre of Canada everything can be overly expensive. Among other dishes one should highlight the variety of salads, omelets or meats. For instance, a delicious dessert that has the name of Niagara falls made of chocolate is a must. Still, a good bet is the French toast. 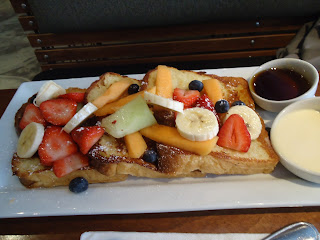 
The Grand Grilled Salmon is a good mixture of fish, vegetables and rice. Fruit medley is tasty likewise as mixes fruit with honey, oat cereal and yogurt. To sum up, if you are visiting Toronto (you will be at Eaton Centre for sure) try eating at City Kitchen Restaurant and Bar Toronto as it is a good experience and if Linda serves you even more!! City Kitchen Restaurant and Bar is on 220 Yonge Street, Downtown Toronto.
Posted by Halcombe Norilsk
Email ThisBlogThis!Share to TwitterShare to FacebookShare to Pinterest