Trasmoz, witchcraft and a malediction

Trasmoz, with barely 80 inhabitants is the only one Spanish municipality officially declared wicked by Catholic Church, a title it owns since centuries ago (1519) something that only the Pope could revoke. Similarly, it was also excommunicated from the Catholic Church in the 13th century. Trasmoz is situatated in the locality of Tarazona and El Moncayo, on the province of Zaragoza region of Aragon northern Spain but it is likewise very close to other regions such as Navarra, La Rioja and El Moncayo is the highest point of Iberian Peninsula, something that adds magic to this place. In the year 2002 a book containing fables and tales therein related to El Moncayo called "Memorias del Moncayo" ("Memories from El Moncayo") was published with a stunning cover picture, one of this stories was written by myself, little did know back then that the best view of El Moncayo is taken from Trasmoz as it is the favourite place among photographers to shot pictures of El Moncayo also known as The little Fujiyama Mountain. Take a look!! 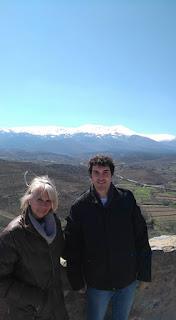 Few weeks ago I met a German born writer for the BBC who was in charge of writing a story about Trasmoz for the British corporation as I am from this area she did invite me to live with her the adventure of discovering the curse of Trasmoz. Close to Trasmoz we can find the Monastery of Veruela an emblematic place that was the home of two special siblings, Becquer brothers. Gustavo Adolfo Becquer was a writer and a poet who found himself living in this building in 1863 in order to see his health improved contingent upon the fact Becquer suffered from tuberculosis and the winds of El Moncayo mountain were deemed suitable to recover from such sickness. Becquer wrote many tales dedicated to this place that made this rural part of Zaragoza famous in consequence. The book "Cartas desde mi celda" ("From my cell, literary letters") is the name of the play in which some of these pieces of writings about Trasmoz and El Moncayo are included. Becquer and his brother Valeriano who was a painter, were living  on the monastery of Veruela for almost a year, a period that is considered to be a key part of their respective artistic careers. Indeed, Gustavo Adolfo Becquer is a compulsory subject in Hispanic literature and his figure is a renowned one, he was a precursor in the field of Spanish literature. Inka, writer for BBC promised us to be included on her article. However, it could be even more exciting to discover her opinion regarding my book Ser un Tusitala Ser un Tusitala 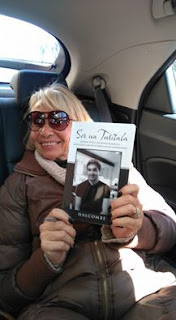 Jaime was our efficient driver as we were able to see different parts of El Moncayo and Lola, an expert and also Patroness for the Foundation of the Castle of Trasmoz showed us this Castle (Lola is a witch as the people of Trasmoz choose the witches now in an official manner) we were taught under the lessons of Lola thus we learned a lot, Inka had a precious information for her article and we learned plenty of things, it was an unforgettable day for us as we now know everything perfectly, we knew some facts already because we are from that area, yet we can now talk of it appropriately. Lola herself is not from Trasmoz she is from Zaragoza, yet she is now the best ambassador of Trasmoz, she explains the history of Trasmoz and its environs adroitly. 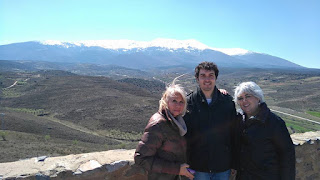 Beautiful view of Moncayo from Trasmoz with Inka and Lola

Every year many acts are celebrated in Trasmoz in connection with witches and the world of the fallen but everything is because of a fame received more than reality, it is notwithstanding true that something happened in Trasmoz, a real chapter included in the book of Becquer for instance known as "La leyenda de la tía Casca" (the legend of aunt Casca), an old lady from Trasmoz who was accused of being a wicked witch hence she was killed, the exact spot where she perished is still remembered. It is also believed that many meetings between people keen on natural medicine have been taken place in Trasmoz throughout history. The first official documents that prove the existence of The Castle of Trasmoz are from 1185 although at that period of time Trasmoz appertained to the region of Navarra, its geographical location hence has made Trasmoz to belong to different Crowns. Aragon is the Spanish region with the highest number of castles, this particular one was important due to its location as everything happening could have been devised from it. When the Crowns of Castilla and Aragon were united the Castle of Trasmoz was no longer so important. With regards to the excommunication from the Catholic Church (13th century) we ought to convey the following, Catholic Church owned everything Trasmoz aside that also had the control of its own water, a conflict with Monastery of Veruela started thereby a bad reputation was imposed on Trasmoz and it was accused as well of holding hiding acts of witchcraft and having wicked withes living on it something so that intimidate and to create an awful reputation. By contrast, what was actually happening on Trasmoz was the issue of its own currency because Trasmoz had their own laws, the rest of surrounding places did not. The Catholic Church was losing money and they wished to have Trasmoz paying its customs. In 1511 a malediction was uttered officially with the reading of the psalm number 108 of the Book of Psalms that declared the ruler of Trasmoz, its descendants and its people wicked, a curse that it is maintained to date. 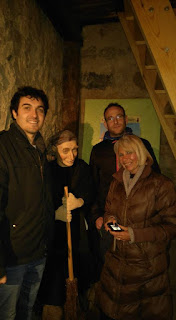 Wicked witches in the Castle of Trasmoz with Jaime and Inka

After years of relevance castles fell in a period of disuse, when democracy was restored in Spain The Castle of Trasmoz was opened to public domain, it had as a result an illustrious owner Manuel Jalón Corominas who helped to keep it in good state. In fact, he also published a book named "La leyenda negra de Trasmoz" ("The black legend of Trasmoz"), his ashes remain on the Castle of Trasmoz. Trasmoz is nowadays a compulsory journey if one is near El Moncayo. What is more, Trasmoz is becoming a touristic attraction thanks to its history, legend, festivals, witches and people like Lola with whom we spend the day. A malediction never felt so great before!!! (There is even a current cinematographic project placed on Trasmoz) Did you know this malediction? Have you ever been to Trasmoz or El Moncayo? Do share and comment the malediction of Trasmoz. Trasmoz
Posted by Halcombe Norilsk
Email ThisBlogThis!Share to TwitterShare to FacebookShare to Pinterest