(This is what would have happened to me had I spent 24 hours in Manhattan, New York City.)

24 HOURS IN MANHATTAN, NEW YORK CITY.
24 hours in any city might be an amount of limited time but when you are going to the city known as “The city that never sleeps” one must be even more careful and with the security of having everything under control. (Lee esto en español 24 horas en Manhattan Nueva York Original Story 24 Hours in New York)

This is the reason that whilst I was going to New York I chose to watch plenty of movies and television serials set on this place during the flight from Europe to JFK airport. The problem is that the last movie I watched was "The Terminal" starred by Tom Hanks. This is why I grabbed my passport and hid it strongly. I did not want anybody to steal it!!!!

It was such a shame I was not able to watch my favorite movie, Taxi Driver, directed by Martin Scorsese with Robert De Niro as main protagonist. Yet, I watched episodes of television series “Sex on The City” and “Gossip Girl” which gave me plenty of ideas of what could have been taking place in New York throughout my 24 hours journey.

I was going to stay at The Plaza, A Fairmont Managed Hotel that belongs to Accor. A deluxe hotel. Majestic and historical likewise. Situated closed to 5th Avenue on the southern entrance of Central Park.

There was not time to lose. After leaving my luggage in the beforementioned hotel I was buying clothes on Fifth Avenue to look stylish during the party I was going to attend later that day.

After two hours of shopping clothes on Fifth Avenue. Not only did I have quality clothes to wear. I was also getting the mood of this city. In order to feel even more integrated, I ran across Central Park, stopping to have some refreshments as the picture may prove (street wear though). 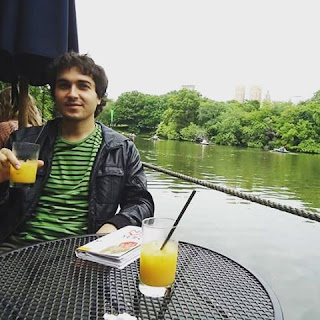 
Once a hot shower had finished I went back to the street so that taking a ferry. I had a pleasant trip across the coast of Manhattan passing by Statue of Liberty. A panoramic vision of Manhattan on the ferry with the big Statue of Liberty as solely witness made me feel so special that it is something I will always remember. Instead of going back to the place from where I took the ferry I decided to stop on South Ferry, from whence ships go to Staten Island.

I was in the southern part of Manhattan. I started walking direction Plaza Hotel. As a result, I had travelled the whole isle of Manhattan (more or less). First, I had been running to the north through Central Park, secondly, travelling by ferry. Finally, I was going to walk the streets like other New Yorker, looking everything carefully and stopping deliberately in some key spots. I visited National September, 11 memorial place leaving some flowers to pay my personal homage. I took pictures on Broadway, Wall Street and United Nations Building and I also went to last floor of Empire State Building. Seeing the impressive skyline made me scream passionately: New York is mine!!!

When I was in Times Square I ate something quickly, hot dog, soda and French fries while a musician was singing for live television. I did not lose a second because I got tickets to see New York Knicks at Madison Square Garden against Cleveland Cavaliers. I was going to be able to devise an official NBA basketball game!!! 24 Horas en Nueva York To be continued 24 Hours in New York City