DONALD TRUMP
Donald Trump never loses. In fact, he is the president of United States with no prior experience or knowledge. However, once he has obtained what he was searching for he has to face the truth. The United States is losing a lot because in the international sphere Donald Trump is doing nothing, yet preparing himself for reelection. 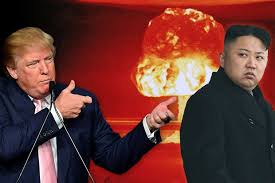 Donald Trump is already in history books. Yet, if he wants to really be remembered, he has to do something nobody has ever achieved. His beloved Reagan was not able, his hatred Obama was not able nor Bush or Clinton. This is to visit North Korea and to meet the North Korean president. The world will be a safer place because if we face a nuclear war: WE ARE ALL DEAD!!!!!
Posted by Halcombe Norilsk
Email ThisBlogThis!Share to TwitterShare to FacebookShare to Pinterest