Erron Morad in Who is America?

WHO IS AMERICA?
After two middling movies such as "The Brothers Grimsby", or "The Dictator" Sacha Baron Cohen and his team have found a perfect format for them to shine. "Who is America?" is a 30 minutes show for television that fits perfectly. Who is America

Because the programme is shorter than a movie, the appearances of the dissimilar character impact on viewers harder than when they make a movie. There are 5 new characters invented by Sacha Baron Cohen. In my opinion, the best of them is Erron Morad. 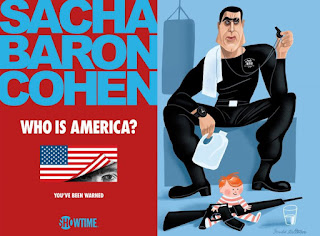 ERRON MORAD
Captain Erron Morad is an Israeli anti-terrorist expert. He wants to implement his knowledge into the United States in order to fight against radical terrorism. Not only the acting of Sacha Baron Cohen is superb, but the adventures of this character are also always funny.

What is more, he interviews relevant American people who seem fools as Erron Morad makes them look like that. I do not want to provide further details, but if you can see this show do pay attention to this Israeli character: Erron Morad.

SACHA BARON COHEN
Sacha Baron Cohen is one of my favorites comedians. What he does is really, really difficult. I recommend everybody to watch this television series: "Who is America?". However, I do not know if they should do a second season owing to the nature of the series. 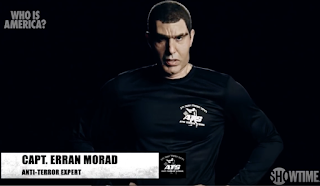