Spain is to live its fourth election in four years, the second of this 2019 year this Sunday. There is a plethora of political parties, consequently, forming a lasting government is a gruelling task. 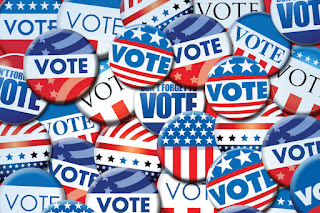 One of the corollaries of the global economic crisis of 2018 is the apparition of new political parties, hence reaching agreements is nearly impossible. Indeed, experts assure us the resulting government could not govern 4 years given the division we are experiencing and the dissimilar parties we have.

Voting is not compulsory in Spain something that it is in some countries I have heard. In my opinion, it would be great to make voting compulsory as it will increase participation. What is more, a 20 euros fine could be imposed for those who do not want to vote. As a result, more votes will be registered and a new income could be obtained. What do you think????

Do you think it is a good idea to make voting compulsory and imposing a 20 euros fine to those who do not want to vote???
Posted by Halcombe Norilsk
Email ThisBlogThis!Share to TwitterShare to FacebookShare to Pinterest