The Irishman by Martin Scorsese

The new movie I really want to watch is The Irishman by Martin Scorsese. It is the 26th film overall that Martin Scorsese directs. Likewise, it is the ninth collaboration between Robert De Niro and Martin Scorsese and the first time legendary actor Al Pacino works with this director. What is more, another legend, Joe Pesci, appears on it as well. 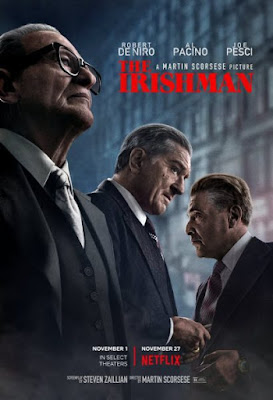 The Irishman is based on a novel called: "I heard you paint houses" which tells a true story that shows us the recent history of the United States. Movie critics and reviewers have deemed the Irishman as a masterpiece. I hope to see it soon albeit it lasts more than 3 hours!!!