Amy Monzon, a star is born.

Following my last post I am writing about a female star likewise albeit its is a popstar in which we are focusing our story today, a wannabe worldwide sensation in due course because she has just unveiled her first official videoclip named Love Song, it has nothing to do with hip-hop, instead, Amy Monzon sings a charming ballad clad in stylish clothes what does love mean for her. Pundits claim poor quality has debased the world of pop music. Relatively speaking, Amy Monzon is good news as you are to realise in just a moment. 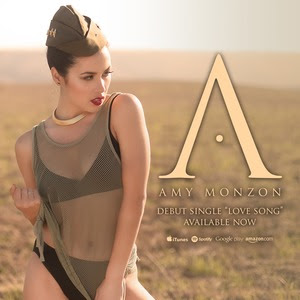 Amy Monzon A star is born

Both the song and the videoclip of Amy Monzon Love song are genuine. After being graduated from San Diego State University Amy Monzon decided it was the proper time  to follow her dreams therefore she entered the world of music in order to pursuit a successful career in pop. Her first official song of her own is this Love song which was published in January, 2015 it can be enjoyed now.

Amy Monzon has an innate talent and her professional career seems promising thanks to her beauty, voice and dance skills hence career of Amy Monzon should be taken into account. To prove what I am saying here you can watch a cover version of  Rihanna´s hit Stay so brilliantly rendered by Southern Californian star Amy Monzon that the title of this post has a fully significance.