Fairness is of paramount importance for Halcombe Norilsk thereby you are to read today a story about  Cara Delevingne beloved icon of our modern times, one of the best supermodels of current days as a matter of fact. Yet, when seeing British sensation Cara Delevingne do you envisage a beautiful supermodel who is amongst the most coveted professionals of fashion world ever born? Have you scrutinized Victoria´s Secret Angels?  Have you seen Sports Illustrated supermodels? Could Cara Delevingne be included amongst one of these exclusive groups?. Two years ago,  Cara Delevingne appeared on Victoria´s Secret Fashion Show, (that edition was of British inspiration (2013)) Cara Delevingne was appointed to dress like an English footballer, it only could be that way, otherwise, she would had been like a fish out of the water because Cara Delevingne belongs far much more to the football pitch than to a fashion catwalk, she ought to be playing football, instead, what she is becoming is a legendary supermodel believe it or not. (I repeat, believe it or not). 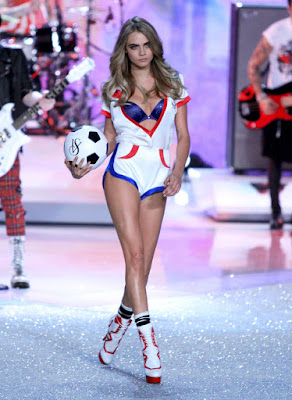 Many claim (albeit they are hated maybe they are absolutely right) that Cara Delevingne (apart from being from an influential and privileged environment) is an artificial stunt arranged in such a way so that pleased her family. Cara Delevingne was born in Chelsea and she was educated in the privileged School Bedales (her classmate was the youngest daughter of Mick Jagger for instance), her mum is a close friend of the Duchess of York, her dad is a businessman and her grandmum without going any further worked closely for the Princess Margarita. Cara Delevingne could be today whatever she wished for, inside New York Stock Exchange, in politics but she chose the world fashion and her agenda, full of important names, made the rest. She should have chosen to become the owner of a multinational because wanting to be a supermodel with such a look, face, behaviour or attitute is so impertinent that one guess how on earth she decided to become a supermodel because in my opinion Cara Delevingne has the face and the figure of anything except of a coveted supermodel but nobody cares about this and everybody trusts the industry of fashion. Huge mistake. 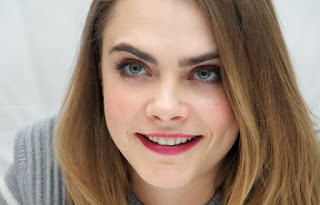 Cara Delevingne is one of the most strange and unfair cases ever, even though fashion brands do love her, she sings, appears on movies and is the star of numerous fashion campaigns, she even has won some beauty awards and she has been appointed as the successor of Kate Moss!!!! (I repeat the successor of Kate Moss!!!!) Her success is because her image sells not because she is an outstanding supermodel. Her face has always remembered me of that frog that appeared on Mario Bros which should be stepped on by the plumber, now cartoons have been improved, these are not like in 1990s but still it has a similar look, if not, look the image above, if you own the video game Mario Bros from 1990s the similarity frightens anyone. 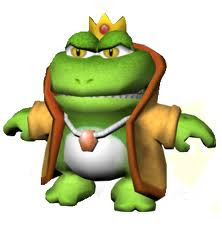 By contrast,  humble models have forged a career based on hard work and sacrifice, supermodels who come from poor countries whose families have fought hard in order to give her daughter a proper education and even there are some whose stories are so appalling that one only can admire them. All of a sudden, a spoiled girl appears backed from influential people who only knows how to put strange faces conveying silly jokes with a proper British accent and everybody has to applaud and trust on the supposedly justice of meritocracy and keep believing Cara Delevingne is a supermodel. Cara Delevingne is an ordinary person and her figure is not good for the fashion industry, something is being popular and another have talent, class and beauty. Personally, Cara Delevingne is abhorrent to Halcombe Norilsk and I cannot stand seeing her on the most relevant fashion campaigns. She is relevant because she sells nor because she is an important figure. 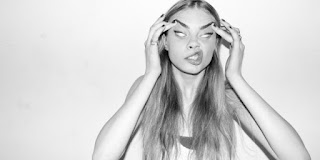 In my opinion Cara Delevingne is not a supermodel,  Name one of them. (Joan Smalls, Candice Swanepoel, Constance Jablonski, Emily DiDonato, Toni Garrn, Lindsay Ellingson, Hannah Ferguson, Elsa Hosk, Martha Hunt, Ana Beatriz Barros, Hannah Davis, Lauren Mellor, Sara Sampaio, Catherine McNeil, Irina Shayk. Or in United Kingdom Jourdan Dunn o Rosie Huntington-Whiteley). In my opinion, Cara Delevingne is nothing more than a marketing stunt. Cara Delevingne is the result of a mixture of influential contacts, wealth, money nor a supermodel and those jokes she is constantly doing are because she knows it so she is laughing out loud of ours!!! Is Cara Delevingne a multimillion supermodel, actress and singer? Yes, her curriculum says so. Do share and comment.
Posted by Halcombe Norilsk
Email ThisBlogThis!Share to TwitterShare to FacebookShare to Pinterest