Eva María Gonzalo Torrellas travelled with her beloved Australian friend Kirralee to Peru in August of 2005 to spend a holiday. Apart from being pals, they were also colleagues hence they decided to traverse the aforementioned South American country with a third friend and also coworker Maria from Northern Ireland. These 3 workmates had already visited other European countries such as Austria or Czech Republic when their schedule allowed them to do so. However, this time was to be an utter journey inasmuch as they were going to another continent to cross such a special country as Peru is. At the last minute, Maria did no travel nevertheless, Eva and Kirralee travelled alone consequently living mesmerising adventures as a matter of fact, just like the ones they happily told people while in South America. They had flown from London to Lima through Houston. On the return flight they were going to visit New York City, spend some days there before heading to London one more time because the new scholar year was about to start. They were labouring in a school in Camden, London. Yet, once in Peru and when their holidays were vanishing they decided to see Iquitos, in the north of Peru ending  the vacation therein. In concordance, they took a flight from Peruvian company TANS Peru with such bad luck they passed away in the crash plane that took place in the summer of 2005, the plane fell in a dangerous place close to Pucallpa and Amazon River. From August, 2015 henceforth, these two friends have a never-ending tribute in the London school where they were working. As a result, this place serves as a never ending tribute to these two comrades not only of friendship but also of work and now of eternal residence. Eva was 27 years of age, Kirralee 25 (only two days ahead of being 26 years old). 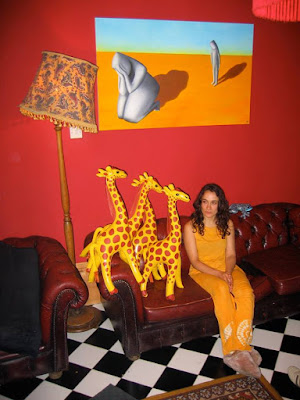 Eva María Gonzalo Torrellas was born and raised in Tarazona, province of Zaragoza, northern Spain. Prior to visit Peru, Eva said her farewells to friends and relatives as she stayed in Tarazona for a week. When she was 18 years old she had moved to Zaragoza to start college, after ending her University career and worked briefly she went to Bournemouth, Dorset, south of England in order to learn English and work. 2 years later she moved to London, after 3 years in the capital of Britain Eva was working in Camden and living in Hackney that summer of 2005. A Wikipedia page remembers the crash plane.
Eva and Kirra on Wikipedia

Eva rests in Tarazona and Kirralee does it in Australia, yet recent happenings oblige us with assuring and vouch for the fact that Eva and Kirralee will always be present and somehow alive in the city of London, the place where their trip did commence and where now concludes. Do share and comment. Have a good day.
Posted by Halcombe Norilsk
Email ThisBlogThis!Share to TwitterShare to FacebookShare to Pinterest