Following my sudden yet short success as Rosie Mac herself, model, dancer, actress and body double of Khaleeshi in Game of Thrones television series, read and shared one of my stories I have decided as a result to write something using a funny picture that Rosie Mac has posted on social media where we see some of her fellow body doubles of Game of Thrones. 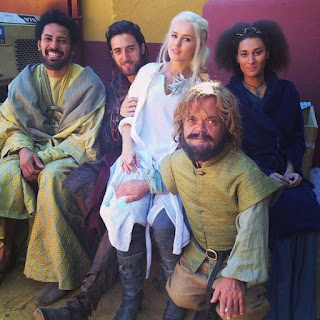 After having seen this picture no much more must be added, perhaps that Rosie Mac is from Newcastle, northern England although she has been living in the south of Spain for years, she is only 18 years old and interestingly, she wants to remain chaste until the day she gets married. Will Rosie Mac be a movie star of her own? Will she keep her promise alive? I bet there will not be a shortage of offers for both questions!! Do share, rate and comment.
Posted by Halcombe Norilsk
Email ThisBlogThis!Share to TwitterShare to FacebookShare to Pinterest