"My mouth doth water, my breast doth swell" (Penelope Devereux) With those witty words author Philip Sidney plays indirectly with the name of his beloved Penelope Devereux with whom he is in love. Nonetheless, she marries Lord Rich thereby he decides to write about his impossible love rendering one of the best sonnets in literature history. Now you can read the first verses of Sonnet 6 by Philip Sidney found on his play Astrophil and Stella

Sonnet 6 Astrophil and Stella
Some lovers speak when they their Muses entertain,
Of hopes begot* by fear, of wot** not what desires:
*created **who-knows Of force of heav’nly beams, infusing hellish pain:
Of living deaths, dear wounds, fair storms, and freezing fires.
Some one his song in Jove, and Jove’s strange tales attires*,
*dresses Broidered with bulls and swans, powdered with golden rain;
Another humbler wit to shepherd’s pipe retires,
Yet hiding royal blood full oft in rural vein.
To some a sweetest plaint a sweetest style affords,
While tears pour out his ink, and sighs breathe out his words:
His paper pale despair, and pain his pen doth move.
I can speak what I feel, and feel as much as they,
But think that all the map of my state I display,
When trembling voice brings forth that I do Stella love. 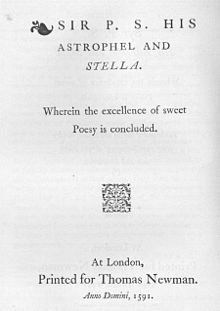 Philip Sidney is an English poet, respected and recognized both because of his plays and life, he died very young in The Netherlands, this and his personality made him a legend. As he critized the Queen of England Elizabeth II who had been married wrongly (according to him) to Duke of Anjou he was olbigued to live retired in the countryside where he started to write, albeit he was not interested in the publication of his plays he defended poetry vividly. This Astrophil and Stella is his masterpiece dedicated to the aforementioned Penelope Devereux, he tries to explain how difficult is to express accordingly the feeling of love through writing and how silly were classic poets when they wrote about love, this poem is a parody of the latest even though he used some of his techniques. With regards to the title, Astrophil and Stella. Aster means star and phil lover in Greek. 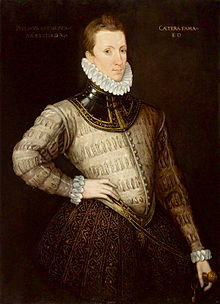 
As this poem was written amidst 1581 and 1583 the English we find is complicated, to make it easier here you can find some definitions.

Definition of some old words found on this piece of writing. University of Cambridge dictionary.


BEGOT:
Old use to be the father of
In the bible it says that Adam begat Cain and Abel
FORMAL To cause
Poverty begets hunger and hunger begets crime

WOT
Used in writing for what or that
"wot? no food?"

ATTIRES
clothes, specially of a particular or formal type

BY JOVE
by Jove used to express surprise or to emphasize a statement "By Jove, I think he has won"

DOTH
In the past, la 3rd person of verb do

POWDERED
in the form of fine particles of dust

PARODY
Writing that intentionally copies the style of someone famous or copies a particular situation, making the features or qualities of the original more noticeable in a way that is humorous

LITERARY
His heart swelled with pride he felt very proud as he stood watching his son graduate
Posted by Halcombe Norilsk
Email ThisBlogThis!Share to TwitterShare to FacebookShare to Pinterest