The now coveted and highly mentioned American dream started with Benjamin Franklin, the first self-man made and the first American man of letters, a great representation of the American Enlightenment.

A Bostonian, his father had emigrated from England and was a strict Puritan. At the age of 24, he became famous in Philadelphia.

He was a self-taught man who never went to University. He learned languages and started a new American genre, the self-help book with Poor Richard´s Almanack which talks about being successful and achieving wealth, with memorable sayings, aphorisms that were included in another book “The way to wealth”. 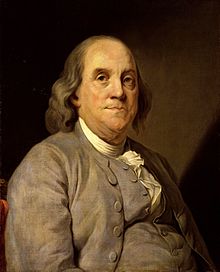 He invented the lightning rod, the Franklin stove or the glass harmonica. He was also a diplomat, especially admired in France. He wrote an Autobiography, to provide a model for public conduct; he translated his personal experiences into general propositions.

Consequently, these accounts could be usefully applied to other people. Benjamin Franklin was involved with the Declaration of Independence which he drafted as he was one of the spiritual leaders of the American Revolution.
Posted by Halcombe Norilsk
Email ThisBlogThis!Share to TwitterShare to FacebookShare to Pinterest