The first texts in America were written in Spanish and the first compositions are oral ones in old Native American languages.

The first English work written in America “A true relation of such occurrences and accidents of Note as hath happened in Virginia” has John Smith as its author. 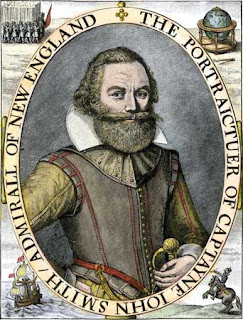 The problem with John Smith is that many critics doubt over the verisimilitude of the accounts that this author depicted in his books. Without going any further, the national myth of Powhatan was created relying basically on an account Smith published seventeen years after the actual events, where he often mixed fact and fiction.

The truth has John Smith published some books in which he never mentioned Powhatan. However, once Powhatan died and she became famous, John Smith included her in a story he had never told previously, the famous one in which they fell in love and she saved him from passing away. What is more, the story with Powhatan is almost equal to a real one that was published in Spain by a Spanish adventurer who met an Indian princess in South America.

John Smith was an adventurer who left England to fight in Hungary. Subsequently, was wounded in battle while in Transylvania. After being made prisoner and sold as a slave, Captain Smith escaped by killing the brother of a girl who had fallen in love with him.

Back in England, he was enrolled in an expedition with a company named Virginia Company that was formed by King James I to be in charge with the settlement of Virginia in 1606. They wanted to accumulate wealth as quickly as possible.

During the trip, he was on the verge of being killed in West Indies. Nonetheless, once in America, he was elected as the main leader of the expedition.

He met indigenous; he fought and also was imprisoned by them for seven weeks. After being released and suffering burnings from a gunpowder explosion, he came back to England to have his injuries healed.

He wanted to visit America again, yet because of his ambitions the company prevented him from doing so, therefore, he started to write about what he lived in the current United States, encouraging Britain to further colonize the new territory.
Posted by Halcombe Norilsk
Email ThisBlogThis!Share to TwitterShare to FacebookShare to Pinterest