Nobody epitomizes the slave narrative genre and the lives of the first African American as Olaudah Equiano does. After being kidnapped in current Nigeria at the age of eleven with his sister, he was held captive in Africa for about seven months, travelling farther and farther, serving different masters along the way. 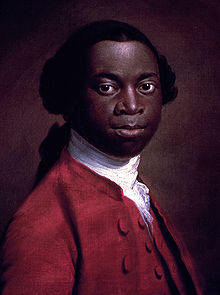 Sold to British traders who shipped him in 1756, first to Barbados in the West Indies, he ended up in Virginia where he was sold to a British naval officer, Michael Henry Pascal, for service aboard his ship. He spent most of his time at sea. Unlike other slaves, he had more opportunities than if he had been on a plantation.

He was baptized in England and served his master for ten years involved in the naval warfare, but this master did not allow Equiano to purchase his freedom as he had promised the slave when the Seven years’ War ended, he was sent to the cruel Indian Slave trade instead, where he had a new master, Robert King, who subsequently allowed him to purchase his freedom for 40 pounds.

Once free, Equiano, named Gustavus Vassa in America after a Swedish warrior, left America. He lived in London where blacks were treated better than in America; he worked as a barber or musician.

Soon thereafter, he was a personal servant to an English gentleman traveling to Italy or Turkey and sailed on exploratory expeditions to the Arctic and countries such as Nicaragua or Honduras, but he resigned in 1777 and became an overseer of African slaves, yet he became so disgusted by the immorality he discovered, he returned to London and gave lectures against the slave trade.

He married a white Englishwoman and had two children although one of them died in infancy. He contributed to the abolitionist cause by writing letters to newspapers and officials.

He told real stories such as the one of the Ship Zong, whose captain had ordered 132 sick slaves to be chained together and thrown overboard so that the owners could claim insurance money for their loss because insurance only would pay for drowned slaves. From 1789 to 1792 House of Commons heard evidence for and against slave trade; he sent narratives to the members of Parliament of Great Britain.

His book, The interesting narrative of the life of Olaudah Equiano, or Gustavus Vassa, the African, written by himself became a success being translated into German or Dutch, people loved to read the true life of a slave and the stories Olaudah Equiano saw and lived, first as a slave and after as a free man.

His book was used against slavery. Ten years after his death, the British Empire started to end slavery throughout its colonies.
Posted by Halcombe Norilsk
Email ThisBlogThis!Share to TwitterShare to FacebookShare to Pinterest