Nowadays, the world of marketing and advertisement has made us got used to provocative images, raunchy photographs, steamy video clips, they seem normal in our society something that would frighten our ancestors, both male and female models have now an incredible and really well paid job, not only may we see them in fashion venues they also appear in video clips, movies, television programmes and more things. Sexy

Image is essential and ordinary people are concerned to it too. Notwithstanding, sometimes professionals push the limits too much and some commercials are banned albeit it is really difficult to see what is moral and what should be banned. There a lot of commercials, advertisements or video clips that perhaps we see as nothing special but they are banned though. Read this in Spanish Sexy

Today, I am going to show some examples of commercials, video clips, photographs and even television appearances which were banned as they were deemed too sexy and too provocative. I hope  you can form you own opinion on this matter and above all, enjoy them as some are fairly interesting. 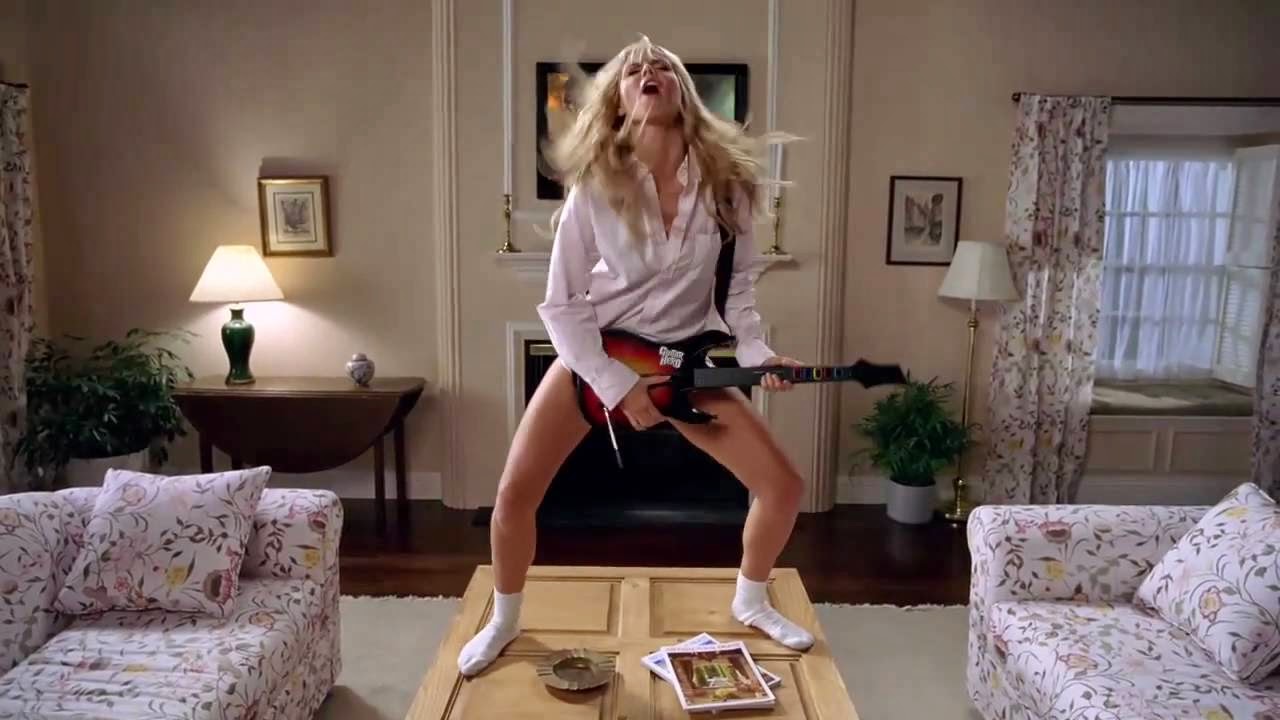 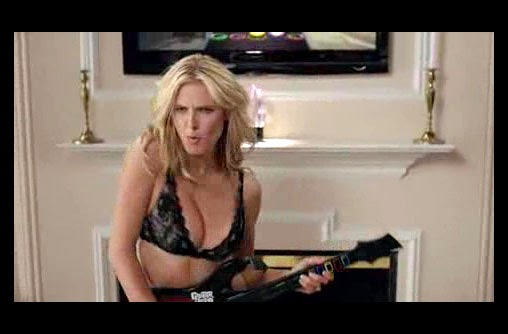 One of the most important models in history, the entrepreneur, mother of four, actress, television host, businesswoman, fashion designer, television producer and occasional singer and painter, the German celebrity Heidi Klum suffered a banned on a Guitar Hero commercial she starred  which was going to appear during the halftime of the Superbowl.

It is clever inasmuch as it recreates one of the most imitated scenes in the history of cinema, Heidi Klum imitates the famous scene in the Tom Cruise´s movie Risky Business. (the banned one has dissapeared, I  have not been able to find it, the only thing that changes is that Heidi Klum does not have this white tshirt at the beginning, take a look).

What do you think? Is the first one excessive? Is the second better?. By the way, Is there still Guitar Hero available? I have not seen this product on shops for a long time

HALCOMBE´S VERDICT: Innocent, it is not so provocative to be banned

One of the most important models of our time the South African beauty Candice Swanepoel has been the last model who has seen her work banned, she is the star of the fall and winter season of the shoes brand Brian Atwood, she appeared in a video and in three pictures that  were going to stand in the Stores of the the  Brian Atwood´s shop in Manhattan in the heart of New York city, however, some people criticised the pictures as they were too provocative because the Victoria´s secret angel Candice Swanepoel seems to be in the middle of  an orgy, the owner of the building in New York was convinced of this notion and the images will be never be shown in the store albeit they were made to do so. However, it is not clear that Brian Atwood will not put them on magazines.

Candice Swanepoel has talked about the ban on her photographs, this is what she believes about the campaign she has made for Brian Atwood

"I respect that they banned it. Not everybody is comfortable with their sexuality and with showing your body.For me it’s not a problem. I’m proud of my body. I work hard for my body. As long as it’s always done in a tasteful way, which it was." 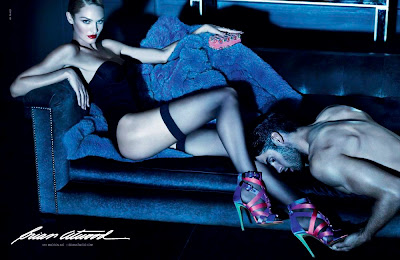 Not only has Candice Swanepoel made some pictures for Brian Atwood, the famous model has also appeared in a commercial for Brian Atwood which has also been banned, it is going to be modified and the video which you can see right now will not appear in this way. 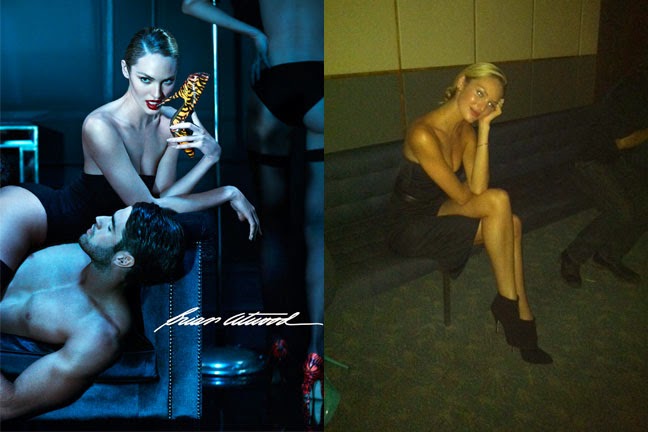 Candice Swanepoel waiting on to shoot for Brian Atwood

HALCOMBE´S VERDICT: Innocent, as it is a great commercial and extraordinary photographs indeed, it is a mistake to have banned that. 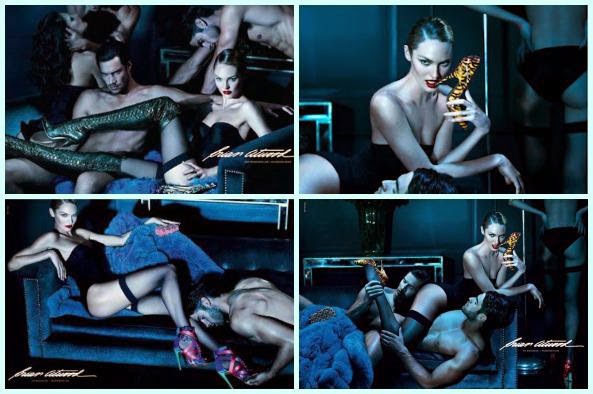 EVA MENDES-CALVIN KLEIN
“We can show guns everywhere and stuff but we can't show a woman's nipple - that's a bit backwards to me.” Eva Mendes.

The American actress Eva Mendes whose parents are Cuban was utterly disappointed when her Calvin Klein ad was banned in the United States as she had a nipple slippage which was included in the final cut of her Calvin Kleín´s Perfume commercial named Secret Obsession,  was it too much for Television?

While shooting this commercial which something unexpected happened, so amazed at the new images the producers were that the original intention was changed. However, authorities banned it and it has never seen on television.

Apart from Eva Mendes, Calvin Klein has also signed another star from Hollywood, the German actress Diane Kruger also appears in a black and white perfume commercial. Besides, another actress as Zoe Saldana has also worked for Calvin Klein. Eva Mendes made a great job and she claims that the guilty image happens so fast that makes the entire commercial natural and more precious.

HALCOMBE´S VERDICT:  Guilty, The nipple was not to appear in the first place,  it was unnecessary hence and avoidable too although the commercial is good.


Whether you believe it or not the truth is that the innocent Katy Perry was banned from Sesame Street because of her cleavage in this video clip with Elmo, it was kept in secret so that being released on Christmas.

Prior to this magic period, it was send in exclusive to some fans which were also mums who send dozens and dozens of letters as they though it was too hot for children, they said Katy Perry shows too much and her skirt and cleavage were not appropriate.

The following video clip has neven been broadcasted. Will you able to watch it or you will be horrified like these American mums?

Some weeks after the ban Katy Perry appeared on Saturday Night Live making fun of the unexpected situation, her appearance is very noticeable. Katy Perry was sad because she had no intentions of make any trouble and she is very popular amongst children.

HALCOMBE´S VERDICT:  Completely innocent (the only thing we can blame Katy Perry is for having been married  to Russell Brand for a while). Would children notice or take care of Katy Perry´s dress, cleavage or skirt? 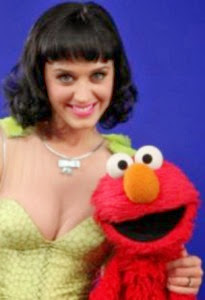 AXE AND NEW YORKER-BANNED COMMERCIALS
The two following commercials were also banned recently but there is not a superstar involved in them, the first one is from AXE. They were not allowed to be on television.

(it has dissapeared though)

This second one is from the American brand New Yorker, it was also banned.

HALCOMBE´S VERDICT: Guilty because of the mediocre quality of the two commercials as AXE´S  message is not so funny and it is unbelievable and the New Yorker one is ambiguous and not so clear what they really want to convey.

ENRIQUE IGLESIAS-TONIGHT
Now, The  most controversial video clip from the Spanish pop star Enrique Iglesias, his hit Tonight had some problems. It cannot be played on radio during daytime and in some places was only allowed on the Internet.

Besides, the original title is sometimes hidden or changed. In fact, there are two versions. Will you notice the differences? Of course because the only thing he changed was the title of the song and the line on the lyrics from "Tonight I am f.....g you" to "Tonight I am loving you". Genius!! Isn´t it???


Enrique Iglesias is the son of one of most important Spanish singers ever, Julio Iglesias. At first, Enrique Iglesias was worry about the quality of his skills therefore he started to write stuff with a false name, however, is one of the most important pop stars in the world, he is dating the erstwhile tennis player Anna Kournikova.

His hit Tonight is one of his most important songs, this is what Enrique Iglesias said about the song Tonight. "It's probably what a lot of guys and girls think about at times, but they don't have the guts to say. It's pretty straightforward. Music has become so direct and you can say whatever you want, which is cool. At the end of the day, it's just a song you don't have to take it seriously. You can have fun with it".

In the end, the clean version with the word "loving" tends to be more used. 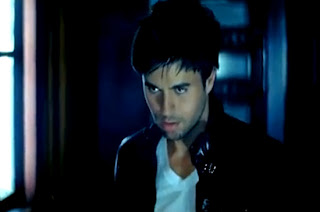 Enrique is looking for Women Tonight

HALCOMBE´S VERDICT:Deliberately guilty. Enrique Iglesias is a pop star and not even rappers put that word in the title of a song or in the chorus, I do not even know how Enrique wrote that thing and the change for the word loving makes the song and the video clip a little silly.

Sometimes, it is really, really easy to provoke and make controversy something which maybe was the aim of this singer.

What is more, they changed the sinner word but the steamy images with the models are still on, Does it make any sense?.

One of the most famous banned commercials and also one of the best ad ever  is this one in which Kyle Minogue appears working for the lingerie brand Agent Provocateur.

This commercial was banned from television but it was shown in cinemas, as a matter of fact, it was voted the best cinema advertisement of all time according to Digital Cinema Media.  Kyle Minogue is one of the most popular pop stars in music history, she was born in Australia but all her career has been done in the United Kingdom where she is a huge star.

She is also an actress and she has appeared in films such as Street Fighter or Moulin Rouge. Her works in the early 2000s made her a super star again, her songs are really popular, catchy and good.


This commercial was done when the Aussie star was back in business after 10 unsuccessful years and in the top of her career and popularity, it was soon banned from television What do you think?

HALCOMBE´S VERDICT: Guilty, one of the worst things Kyle Minogue has ever done and it does get on well with her image neither. However, it is one of the best cinema advertisement in history according to Digital Cinema Media.  I do not consider it so good.﻿

RIHANNA- S&M
This video from one of the most famous stars in music, the Barbadian singer Rihanna was banned in 11 Countries and it is not so easy to watch on You Tube for instance. It contains some scenes which were not very well received, it features the famous celebrity blogger Perez Hilton acting as a dog, and Rihanna was sued as some images were copied from a famous photographer.

If you have not seen it you have now an opportunity and if you have any trouble viewing it you must open a You Tube account.


HALCOMBE´S VERDICT: Guilty. I think is not an original nor great video clip and it destroys a little bit the song which is great and provocative in their lyrics already, in consequence, that video clip was not necessary. It only looks for controversy in  a superficial way. Sexy Anuncios sexy Anuncios sexy

Lastly, I want to make clear  what I wanted to express is my understanding of the reasons which made authorities to ban them, I am not saying that I support the actions.

Hope you have enjoyed it!
Posted by Halcombe Norilsk
Email ThisBlogThis!Share to TwitterShare to FacebookShare to Pinterest