The erstwhile hubby of Madonna, British film maker Guy Ritchie, has directed David Bechkam in his last commercial for the Swedish fashion brand H&M.  "David Beckham is the perfect leading man," says Guy. "For me, this felt like more than a campaign it was like directing a short film." Meanwhile, David Beckham thinks the following "It's been great working with Guy. He's one of my favourite directors, and also a friend, so it was amazing to work with him on my new Bodywear commercial for H&M...I love Guy's film Lock, Stock ('Lock, Stock and Two Smoking Barrels'). It came out in 1998, which was such an exciting time to be British. I remember the attitude and energy of the film as if it were yesterday, and it went on to define so much about how British men saw themselves for years to come"

BODY DOUBLE OF DAVID BECKHAM
David Beckham has not done all the parts of the commercial. In fact, you can spot in the photo below a figure that has acted as body double for David Beckham A spokesman for H&M has assured Halcombe Norilsk that this double only appears in so few parts that it can not be taken into account but David Beckham did not mention it in the first place nonetheless.

At 37, David Beckham does not only have such a pert body that makes feel jealous even twentysomething models, there is something much more surprising as that he is still playing for a top football team as Paris Saint Germain, the best French club indeed that is currently playing Champions League. Recently, we see the Brazilian player Ronaldinho starting again for Brazil but at 32 is only a shadow of the genius he once was. Likewise, a lot of footballers see themselves being axed from their teams or their careers close to the end little after reaching 30.

Even though  David Beckham has never been a key player his endurance and resistance are commendably, many players at his age would be now retired saying or writing nonsenses on the media or receiving for free a diploma to be coach, yet Beckham is winning the battle of ageing and fighting against other better and younger players.


Whether is only for marketing reasons or only sporting ones the reality is that bigger football clubs do not usually sign old footballers like Beckham. He has played for Manchester, Madrid, Milan and now PSG, the most important clubs in Italy, Spain, France and England. The idea of retirement or decay is being obliterated by this celebrity that has been named Sir already. Still, David Beckham has made clear that his full salary at PSG is to go to charities, albeit he has reached  a great deal in the sense that he obtains a hefty percent from every T-shirt sold with his name on it. However, some say he is to give away the salary as he is trying to avoid the new strong taxation on rich people that Hollande, the current president of La République Française, has implemented.


Shall we believe a person that was supposed and said that he had done all the parts of the commercial for H&M and he reflected in such a great manner that all his salary was for charities? Should we be aware of the great deal with the T-shirts and the loophole to avoid French taxation or should we praise him for being still playing and the status David Beckham has achieved in all  the things he has done brilliantly throughout his career? Do not worry, I clearly know that you are not  answering the question as you are happily enjoying the commercial or thinking how the life of a famous, rich  half footballer half celebrity must be. 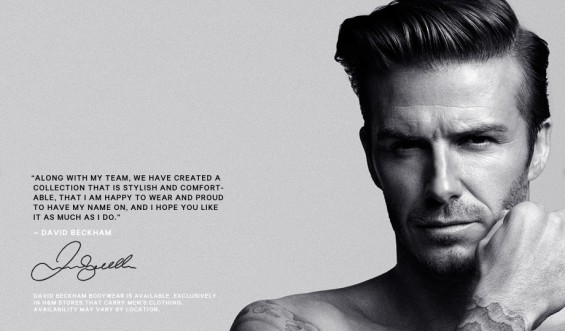