This is life and this is Rock and Roll and even this is AC/DC. After many years of silence AC/DC premiered a new brand album in 2014 Rock and Bust that it was not bad but above all it was an opportunity for them to be back on the road as AC/DC profits a lot from live performances. All of a sudden, brother of Angus Young and one of its founding members, Malcolm Young was sick with dementia hence he entered into a mental Institution. Soon thereafter, drummer of AC/DC was arrested due to drug possession, a thorny issue it has not been cleared as yet. However, the worst was still to take place, after touring the world, singer Brian Johnson was obliged to quit because of a serious hearing loss, if he were to keep singing he was going to be completely deaf. What could AC/DC attempt if some dates were already settled? Did you remember Axl Rose from Guns and Roses? 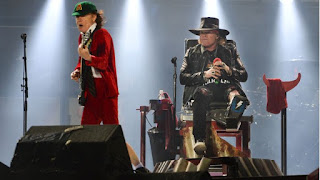 Axl Rose was an iconic rockstar, Guns and Roses were hugely successful, however, there was a feud between the singer and the rest of the band, Guns and Roses disappeared in consequence all the remaining members created other bands such as Velvet Revolver and the main guitar Slash had plenty of musical projects. Axl Rose disappeared, he even had mental issues, later on he was back with a new Guns and Roses album and now it seems he had come to terms with the situation and he has launch Guns and Roses one more time with former bandmates but the most incredible thing is that AC/DC have recruited him to perform the remaining dates of AC/DC Rock and Bust tour. To make matters worse, Axl Rose broke his leg and he had to sing like you are to see now on the first new concert of AC/DC with Axl Rose, see it by yourself!!! Thank God Angus Young is still alive and rocking!!!!!