King Lear tells of a king who divides his kingdom between his children that makes a conflict resulting in chaos and a civil war. One of the daughters, Cordelia, makes Lear angry as she refuses to answer Lear when he asks her to prove her filial love. King Lear

KING LEAR WILLIAM SHAKESPEARE
King Lear disavows his counsellor the count of Kent, he does not listen to him thereby King Lear shares his kingdom amongst his elder daughters, Goneril and Regan. The decision is wrong, his two daughters humiliate him, King Lear lives with nothing as a result. 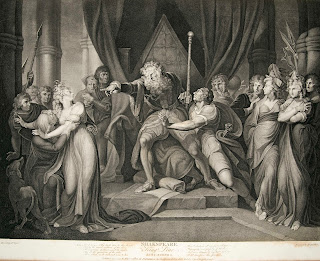 
In the end the three sisters die and the ending of King Lear is more than pathetic, alienated, wanders alone like a crazy person. There is a second story on King Lear. Count Gloucester, counsellor and King Lear´s servant has two sons, he dismisses the one who is the first-born and the rightful heir and gives everything to the second one who is also a bastard.

JAMES I KING LEAR
James I was obsessed with the philosophy of the sacred character of monarchy epitomised in a royal person. King Lear shows the problems attached to someone who is handling a bad ruling, King Lear encourages the rivalry amongst his offspring, acts in a despotic way with counsellors and the huge differences between rich and poor can be devised. James I (King of England and Scotland at that time) could be reflected on this King Lear
. 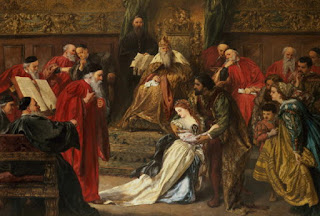 KING LEAR
King Lear was registered on 26th of November, 1607 in Stationer´s Register, it was opened for the first time in the palace of Whitehall on December, 26th. William Shakespeare was inspired by four plays to write King Lear.

Likewise, a true judicial case in which two sisters wanted to make believe their dad was crazy so that obtain a hefty sum of money  served Shakespeare, yet the third one called Cordell (by the way) shunned the dirty deed. Shakespeare makes an eclectic use of a wide range of sources to write its own play, he combines details, plots to create its own last dramatic play, his more complex ever. King Lear.

KING LEAR
King James I represented the Kingdom of Scotland (since 1567 as James VI) and the kingdom of England after Elizabeth I in 1603, each kingdom had its own Church, Parliament.. the two countries were one because of his persona. Belonging to The King´s Men, Shakespeare enjoyed royal protection, yet he had nonetheless some duties that made him to respect authority.

As a matter of fact, after writing King Lear, William Shakespeare did only write romances. Both Lear and James I widely enjoy hunting, a luxury lifestyle, a great number of manservants or they both squandered a large sum of money on anything. King Lear is deep and ambiguous, the mistake of King Lear is believe power is all his. King Lear Read this in Spanish King Lear 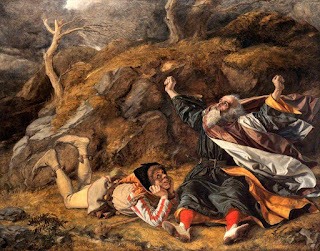