Pros. Come with a thought. I thank thee, Ariel: come.

Ari. Thy thoughts I cleave to. What’s thy pleasure?

Ari. Ay, my commander: when I presented Ceres,
I thought to have told thee of it; but I fear’d
Lest I might anger thee.

Ari. I told you, sir, they were red-hot with drinking; So full of valour that they smote the air
For breathing in their faces; beat the ground
For kissing of their feet; yet always bending
175     Towards their project. Then I beat my tabor;
At which, like unback’d colts, they prick’d their ears,
Advanced their eyelids, lifted up their noses As they smelt music: so I charm’d their ears, That, calf-like, they my lowing follow’d through
180     Tooth’d briers, sharp furzes, pricking goss, and thorns,
Which enter’d their frail shins: at last I left them I’ the filthy-mantled pool beyond your cell, There dancing up to the chins, that the foul lake O’erstunk their feet.

Pros. A devil, a born devil, on whose nature
Nurture can never stick; on whom my pains,
190      Humanely taken, all, all lost, quite lost; And as with age his body uglier grows,
So his mind cankers. I will plague them all, Even to roaring.

THE TEMPEST BY WILLIAM SHAKESPEARE
The Tempest is the last play written entirely by William Shakespeare, it was performed for the first time in 1611 and it is often deemed as his literary testament. In fact, we can infer reading the text some hints aim at this direction. William Shakespeare might have hid an underlying farewell as well on the play The Tempest The Tempest 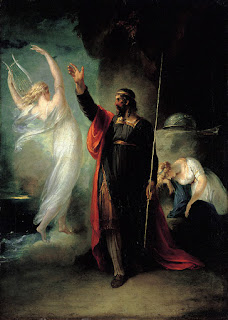 After severe dramas as Hamlet or King Lear, The Tempest belongs to other group of plays called romance ones that are less serious. We have read a conversation between Prospero and Ariel at the beginning of this post. Prospero is a succesful magician and Ariel his helper who makes true all the wishes of Prospero.

Prospero is always talking about Sycorax, a witch that does not appear on the play, yet of whom Prospero is afraid, Sycorax had cursed Ariel to be on a island forever. Prospero has promised Ariel to make him free hence Ariel is to do anything Prospero wants. Prospero lives in the island with his daughter Miranda and also Caliban who is the son of this witch Sycorax. Prospero does hate Caliban.

Prospero and her daughter have been living on that island because the brother of Prospero Fernando took advantage of the deep studies of Prospero as far as magic is concerned to make a coup d'etat so that be the king of Milan, Prospero was sent to an island with his daughter.


THE TEMPEST WILLIAM SHAKESPEARE
Can be interesting to say that The Tempest was inspired by two famous plays, "The Aeneid" and a traduction by Montaigne of a essay called "Of Cannibals" but it is inspired by two travel journeys one of them "Discovery of the Bermudas" by Silvestre Jourdan and other one widely popular "True Reportory of the Wracked" by William Strachey. Likewise, William Shakespeare also read a document about the state of Virginia, located in the current United States of America. 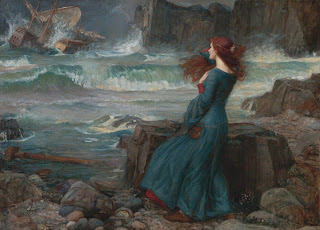 Miranda depicted on the famous The Tempest painting

Prior to this scene there is a conversation between Prospero and Ferdinand in which Prospero allows Ferdinand to marry his daughter if they do not sleep together until they are married. Ferdinand agrees. In order to fulfill such an important commitment, 3 goddesses, Juno, Ceres and Iris carry out a masque to celebrate it and praise the values that marriage epitomize. After the scene, Trinculo, Stephanus and Caliban try to kill Prospero, yet Ariel is by his side hence they are not to be so lucky.

THE TEMPEST WILLIAM SHAKESPEARE
Roughly, there are 3 main themes on this play The Tempest. First of all, power and how it is handled. Secondly, contraposition between nature on its primitive state, art and culture.

Thirdly, Colonization of new territories. Given the peculiarity of the relationship between Prospero and Ariel, that is the key and one of the most memorable moments on The Tempest contingent upon the fact Ariel is a good spirit who sometimes it is only seen by Prospero, it makes true all the wishes of Prospero as he helped him to escape from a curse made by witch Sycorax.

It is Caliban the son of that witch, Sycorax, a monstrous slave who is mentioned on the scene. Witchcraft was a very serious issue on that epoch, being accused of it was really stern, it was assured witches made love with the devil, Sycorax as a result, could be considered to be a relative of a demon. Caliban does not apply any clever instructions but it is a certainty from Prospero, perhaps it is not the reality. The Tempest Read this in Spanish La tempestad William Shakespeare
Posted by Halcombe Norilsk
Email ThisBlogThis!Share to TwitterShare to FacebookShare to Pinterest