Being 24/7 in the spotlight  helps Donald Trump to gain popularity but it has  its drawbacks nonetheless as Donald Trump receives plenty of media coverage but also plenty of imitations many of them criticising him savagely or making fun of him. You are to enjoy some very funny moments of parodies regarding Donald Trump with a special final surprise.


Donald Trump talks to the mirror 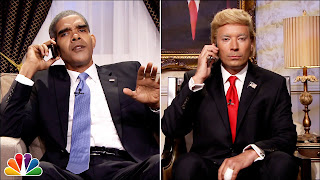 
No many people do remember this, yet we ought to show this video in which Barack Obama humiliated Donald Trump in such a way that the now Republican party frontrunner kept his face as good as he could as everybody was making fun of him. In consequence, he promised to get revenge and this day was something like a crucial point for him to decide over his candidature, it is rumoured this intervention of Obama helped Donald Trump to decide to run for president of United States of America subsequently.