Two biggest NBA stars Lebron James and Stephen Curry have decided not to play for 2016 United States Olympic Basketball Team. Lebron James wants to rest, he has already played for United States Olympic Basketball Team on Athens, Beijing and London winning two golden medals and a bronze one. Stephen Curry suffered from an injury at the beginning of last playoffs and he does want to recover from it. Cleveland Cavaliers and Golden State Warriors have played one of the finest NBA finals ever, even one of the most outstanding insofar as Cavaliers were losing 3-1, something Warriors did even attained playing against Oklahoma City Thunder on Western Conference Finals. What is more, Golden State Warriors had surmounted the historical record of Michael Jordan and Chicago Bulls on 1996. Michael Jordan and his teammates had 73 victories and 9 losses. Golden State Warriors have won 73 games losing only 9, yet Chicago Bulls were the champions that year. Lebron James Read this in Spanish NBA Now you can enjoy the best moments of the last game between Golden State Warriors and Cleveland Cavaliers


Even so, no one should be worried at all as the players selected to play for 2016 US Olympic Basketball Team are excellent albeit Westbrook, Griffin, Davis and Harden can no play either we have on this US team the best partner of Curry on Golden State Warriors Klay Thompson. Similarly, the best partner of Lebron James, Irving. Likewise, we see the star of New York Knicks, Carmelo Anthony, the star of Indiana Pacers Paul George or the best two players of Toronto Raptors DeRozan and Lowry. 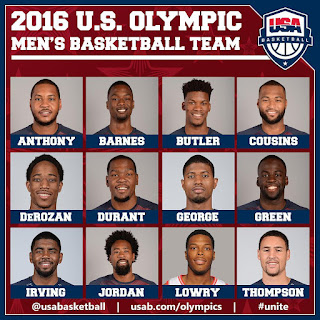 2016 US OLYMPIC BASKETBALL TEAM
Posted by Halcombe Norilsk
Email ThisBlogThis!Share to TwitterShare to FacebookShare to Pinterest