Appropriate is to mention the figure of Ben Jonson author of both masques and urban comedy. It is impossible to discover the personality of William Shakespeare on his plays. By contrast, with Ben Jonson we see just the contrary, all his production have a personal scent. His personality was exuberant with great vitality and energy, he was possessed of a huge capacity with regards to social observation and psychological perception that was added to his extraordinary comical talent. He was exigent and  impulsive something that can be discovered on his poem "My picture left in Scotland" included on the collection "The Underwood". His father was a religious person, his mum married again to a bricklayer and he had to work as one for some time. Despite not being able to attend University both Cambridge and Oxford gave him a  diploma in consequence of such a nice detail he dedicated his masterpiece Volpone to the beforementioned institutions; Cambridge and Oxford.

In order to avoid the profession of bricklayer he enrolled himself on the army to fight in Flandes. In 1598 he killed another actor in a duel hence he spent some time in prison. He became a Catholic and later on he embraced the Anglican confession again twelve years later, his life was overlaid with prosperity and poverty. He wrote masques for the Court.  As he was accused of being on Gundpowder´s plot he worked as a spy for the monarchy. Ben Jonson was an avid reader of classic plays, he strongly believed one should know in depth the profession of writer to become one, a sentence of him was


"A good poet´s make as well as born". Ben Jonson

He would read and would imitate classic authors with a constant exercise of improving the language and the style so that reaching clarity and precision, something relevant for Ben Jonson. The main aim of Ben Jonson was to confer literature with a professional status. Ben Jonson wrote: poetry, theatre and reviews.

BEN JONSON POETRY
Inside poesy of Ben Jonson we ought to praise the play "Epigrams", poems which are models of brevity, conciseness, cleverness and social satire. Ben Jonson criticises political institutions, colleagues or authors. Being an admirer of Horatio he expressed like him

"The impossibility of any man´s being the good poet, without first being a good man" Ben Jonson 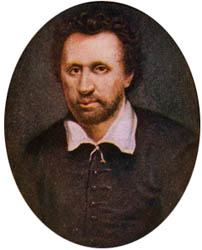 He censures mistakes made by Shakespeare on Titus Andronicus, Thomas Kyd on The Spanish Tragedy or character Prospero main protagonist of The Tempest because fiction ought to imitate real life.

BEN JONSON MASQUES
We have to differentiate between comedies written for the commercial eye and masques for the Court. Masques were a widely popular act, an allegory of an important happening for the Monarchy. Ben Jonson wrote a lot of masques for the court, they were a lavish spectacle with special effects, music or dancing. Masques must praise the king otherwise you could end up in prison. Nevertheless, the masterpiece of Ben Jonson is Volpone Ben Jonson
Posted by Halcombe Norilsk
Email ThisBlogThis!Share to TwitterShare to FacebookShare to Pinterest