Sacha Baron Cohen has achieved it one more time. It looked overly risky to make the second part of Borat, a movie that is already a masterpiece of the XXI century. However, the actor has been able to revolutionize the world again.

READ THIS IN SPANISH Borat 2

His latest television project: Who is America?? was utterly outstanding, I was positively surprised to say the truth and now with the second part of Borat he has made plenty of relevant people to look like fools without losing the creative quality of the first part and its superb sense of humour.

Discover the trailer of Borat 2 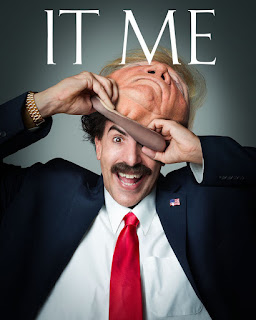 (Sacha Baron Cohen posted this picture on Instagram with this hilarious message: "Premiere Trump Thank you for giving me fantastic head for the last four years"))
BORAT 2

The publicity campaign of Sacha Baron Cohen on social media is really brilliant and funny but there is something else in Borat 2 that we must highlight.

Rudy Giuliani was mayor of New York City and he is a very important person inside the Republican Party. He is, for instance, the personal lawyer of President Donald Trump and one of his closest collaborators.

He appears regularly in the conservative television channel Fox News that defends Donald Trump whatever takes place. Rudy Giuliani is leading a campaign against Joe Biden to libel his son Hunter so that making believe the Biden family is dangerously corrupt.

The last thing Rudy Giuliani has announced is that he has obtained a laptop of Hunter Biden in which he has found pictures of the son of Joe Biden smoking crack with Chinese prostitutes. What is more, Giuliani has found some emails that imply Hunter Biden is involved in a corruption scandal linked to the wife of the mayor of Moscow and the government of China.

However, big tech companies from the US such as Twitter or Facebook for instance and the most important American newspapers or television networks of the US do not accept this scandal as true hence they refuse to talk about it.

Indeed, only Fox News and the sensationalist tabloid of New York, (The New York Post (they both are owned by the same person, Australian tycoon Rupert Murdoch,)) give credibility to this story of Hunter Biden.

Defenders of Rudy Giuliani (Donald Trump without going any further) explain that Giuliani does not make anything wrong. Yet, the prestigious The Guardian newspaper for instance, assures that everybody should see the images to have a personal opinion. That is right... Everybody should watch it to have an opinion as the images are not easy to see... and you are able to see it in this article.

The Hollywood Reporter gives voice to Borat and Rudy Giuliani so that explaining this controversy as you can discover right now.

Sacha Baron Cohen and Maria Bakalova, the actress who interprets the daughter of Borat in Borat 2 explain what did happen in the television programme Good Morning America.
BORAT 2
BORAT 2
Sacha Baron Cohen explains the scene of Rudy Giuliani and how he found the actress Maria Bakalova to play the daughter of Borat in the show of Steve Colbert.
What do you think??? Do share and comment.