The Wall of Donald Trump and the 2020 US Elections.

Donald Trump talked incessantly about his project regarding a wall between the frontier of Mexico and the United States to prevent illegal immigration. What is more, such a wall was going to be fully paid for by the government of Mexico. Read this in Spanish: El Muro de Donald Trump y las Elecciones de Estados Unidos   Trump sold this idea and it became a recurrent chant in his famous rallies.

Four years ago, British comedian John Oliver analyzed this project of Donald Trump and the difficulties that it implied. Yet, 4 years after, the reality of what has become of the wall is far too more unbelievable and shocking than what John Oliver thought at first as the comedian explains in this video.
The reality overcomes fiction and the worst augurs. Do discover the truth behind the project of the wall of Donald Trump watching the following video. For instance, people close to Donald Trump are being investigated because they stole funds which were donated by followers of Trump to build the wall. Discover what John Oliver has revealed.
THE WALL OF DONALD TRUMP
Right now, it seems normal that Donald Trump is at the White House but at the beginning, everybody was laughing at him and the Republican Party did not want to see him at all.
Trump took advantage of the publicity he received to impulse his campaign and he destroyed all his rivals at the Republican primaries who were experimented politicians and despite everything was prepared so that Jeff Bush, brother and son of a former president, would obtain the nomination of the conservative political party.
The success of Donald Trump was not winning the elections (he lost it for nearly 3 million votes) yet obtaining the nomination of the Republican party. This was the true success of Donald Trump.
Hillary Clinton made an unforgivable mistake, she took for granted some states that usually vote Democrat such as Pennsylvania, Michigan and Wisconsin and in fact, she did not even hold rallies there.
Trump travelled to these states frequently and he did win the elections. There was only 75 thousand votes of difference between them in these 3 states but as Trump won these 3 states he obtained the presidency. Something bad Hillary Clinton would do when these 3 states that were traditionally inclined to vote Democrat chose Trump in the end.
Who is to win the 2020 elections??? Things do not look so bright for Trump this time but the US electoral system is really peculiar and anything can take place.
The popular vote is going to be for Biden probably but if Donald Trump wins Georgia, Florida, Arizona, North Carolina, Ohio and Pennsylvania he will be very close to winning the White House. Yet, if Joe Biden wins one of these 6 aforementioned states it will be nearly impossible for Trump to win the White House. 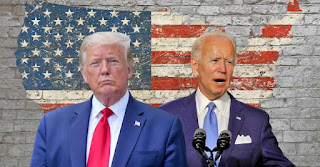 The wall of Donald Trump and the US Elections
To date, Biden has a relevant advantage in Pennsylvania and Florida but Trump won these 6 states four years ago and he is winning in Ohio. There is an unwritten rule that tells that if the Republican nominee wins Ohio he/she gets the White House.
It was not like that in the past. When the United States were born as a country, the candidate with more votes would win the White House (as it happens in the rest of the free world) but they decided to change it to the current electoral system in order to give more power to the states.
Nonetheless, they did not think one day the differences between states would be so big as far as the population is concerned as they are nowadays because there are some states with a heavy population and some rural states that do not have many people living therein. In fact, the electoral system of the United States depicts the reality of the country centuries ago.
In 1960, Republicans and Democrats made an agreement thus they decided to change it because they foresaw that in the future, the winner of the popular vote could lose the White House but in the end, some Senate members stopped the project and there have been 2 presidents in the XXI century, George W. Bush and Donald Trump, who have obtained the White House without having the majority of votes in the country overall.
What is more, Trump does have a plan. As you might know, a progressive judge, Ginsburg, died recently and Trump has chosen a conservative judge to replace her, Barrett.
It was supposed that a judge should not be appointed for the Supreme Court in an electoral year, let alone if the campaign has already started but Trump has ignored this rule, and given the Republicans hold a majority in the Senate they are going to appoint Barrett prior to election day. Only 20 percent of the American population say they are Catholic but 7 of the 9 judges at the Supreme Court are going to be Catholics now.
Obama could not choose a member for the Supreme Court 4 years ago because elections were going to take place such year. Republicans argued that a new judge could not be chosen in an electoral year and they would never do that if Trump was going to win. Not only they are going to appoint a judge in an electoral year but in the middle of a pandemic too and in the middle of the elections besides.
Trump does want to carry the result of the elections to the Supreme Court if the outcome is not positive for him so that the 3 judges he has chosen can give him the White House. It may sound like a scandal but George W. Bush already won the White House in similar circumstances 20 years ago.
Similarly, Trump appointed a person of his confidence who had donated millions to his campaign to lead the Postal Service. This man has cut the funds of the Postal Service so that it works poorly, thereby, the voting recount will be long and if it does not benefit Trump he will claim it is fraudulent to carry the result to the Supreme Court because voting by mail will be counted after election day and this year there will be plenty of it because of the pandemic.
Followers of Trump are going to vote in person but millions of people have used voting by mail to avoid coronavirus infections. Hence, Trump is going to push everything to the limit to win the election by hook or by crook.
2 million votes were discounted four years ago and you have to experience long queues which in many cases last hours in some states to vote after having registered, this does not happen in European countries like Spain where you vote easily in a free day without queues or filling any paper.
Democrats study to put more judges at the Supreme Court if Biden wins but in real terms, they must accept the defeat Donald Trump has accomplished in this field, whether they like it or not the truth is the USA is going to have a very conservative majority at the Supreme Court the next decades and at least, fight so that Donald Trump recognizes the result in order to avoid everything does not end up in the Supreme Court.
The comedian Bill Maher has been saying for years that Trump is not going to leave the White House, that he will do anything to remain in power. Everybody was laughing at him but as always, he was right. Check out this video to find out more.
BILL MAHER DONALD TRUMP
Original article
To end up, discover a YouTube video I have done talking about this subject. This YouTube video contains subtitles in English of my own. Do share and comment.
THE WALL OF DONALD TRUMP AND THE US ELECTIONS
Posted by Halcombe Norilsk
Email ThisBlogThis!Share to TwitterShare to FacebookShare to Pinterest