At first, BLACKPINK was going to be formed by 9 people and the group was going to be called Pink Punk, but in the end, the chosen were the very talented: Rose, Jennie, Lisa and Jisoo and the name was the very witty and original BLACKPINK
In this month of October, 2020, BLACKPINK is going to release an album, they premiere a movie and they are for instance, on the cover of ELLE AMERICA as you can see now. 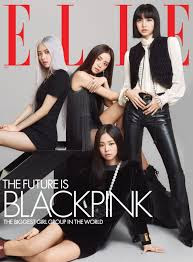 BLACKPINK stars a video for ELLE AMERICA likewise.
BLACKPINK ELLE AMERICA
BLACKPINK has toured the world and here you can see the four of them talking with the BBC. Will be BLACKPINK playing in Glastonbury one day???
BBC BLACKPINK
Similarly, BLACKPINK appeared in the television programme "Good Morning America" playing live.
BLACKPINK Good Morning America.
JISOO, ROSÉ, LISA, JENNIE BLACKPINK
Now, you can discover some interviews in exclusive with Rosé, Lisa, Jennie and Jisoo, members of BLACKPINK. Vogue Korea interviews them. These videos contain subtitles in English so that you can understand fully what they are saying.
BLACKPINK JISOO
BLACKPINK LISA
BLACKPINK JENNIE
BLACKPINK ROSÉ