As times get rough and rougher it is really easy to feel stressed and fed up with everything. We are living hard times indeed. Consequently, Halcombe Norilsk have decided that he ought to write about the Cipotegato as it is an unforgettable experience hence it may help people to feel better. Cipotegato

Cipotegato takes place every 27th of August at 12 o´clock in the morning in a Spanish city named Tarazona. This is not a random invention as it is mythical figure which was born in the Middle Ages, at that epoch it  was  possessed of a religious meaning. 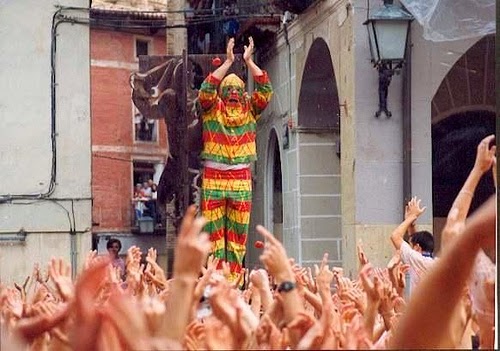 Cipotegato opening the fiestas of Tarazona

Cipotegato epitomises the pride of being from Tarazona, this ancient superb character is a sign of redemption, freedom and strength of a human being. As a matter of fact, not only does it represent the historic character but even a true historical event in the following way.

There was once a prison in Tarazona many years ago and every year a prisoner had a last chance of freedom inasmuch as if he were to escape from the streets of Tarazona he would be free forever. Nonetheless, little did he know that people were waiting on with stones ready to be thrown. As a consequence, one had not many chances of success...

Times do have changed and now people thrown soft tomatoes instead of stones and everything has created a unique festival which opens the "Fiestas of Tarazona".

The festivities in Honor of the patron Saint Atilano in Tarazona, were declared of Regional Interest in 1998 and National Interest in 2009,  every year there is a public poll where the Cipotegato is elected, people born in this Aragonese city can present themselves as candidates.

The whole event is a pretty amusing and thrilling adventure, with battles of tomatoes, the running along the streets and the redemption of the character. The person elected to be the Cipotegato has a difficult task as he/she should be fit, run along the streets of Tarazona and avoid the rain of tomatoes.

After the war of tomatoes, the running of the Cipotegato and the uploading to his statue, the "fiestas" which last almost a week,  are opened and people walk through the streets while musicians play, neighbours throw water and the bars prepare everything in order to receive people who are yearning for “fiesta”.

You only have to be clad in white, have some tomatoes and be ready to feel the charm and craziness of this unique adventure. 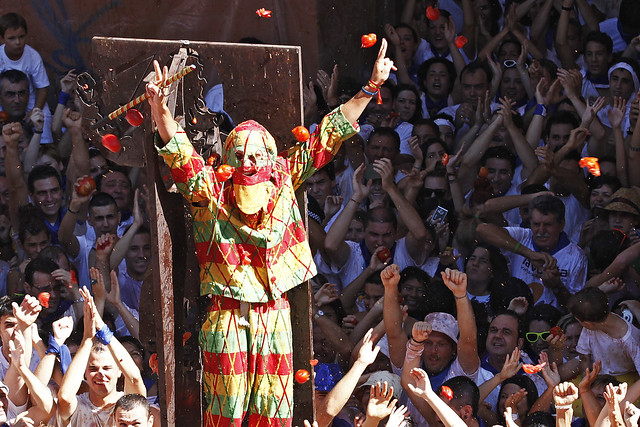 Why don´t you try!! It´s free, funny and addictive!! There are not a single event throughout the entire world like this one!!!.

However, no matter how good can I  seem writing this post as should I see you that day I can assure that you would receive some tomatoes in your face!!!!

Cipotegato, every year in Tarazona. Will I see you next year? . Cipotegato