Why American Elections are always on Tuesday? Donald Trump and Katy Perry

US ELECTIONS. WHY ON TUESDAY?
The elections in The United States of America are always on Tuesday something that does not happen in other countries and it is strange indeed.There was a law passed in 1845 (yes, 1845) which has not been modified and there is little intention to do so which established the first Tuesday of November as the day in which  elections must take place as people those days had to travel by horse to the capital of their state in order to vote. Weekends were not appropriately because of religion, as a result, Tuesday was established reserving Monday to do the trip and Americans still respect this. What is more, in 1792 a bill was passed saying that American elections should be held around November as it was the proper time to farmers to be away from their lands. Concerning this matter and as there are a lot of people who do not vote on Tuesday because they are busy working or studying Mitt Romney suggested that America needed better candidates to boost American´s morale while the rest of Republican nominees did not even know anything about this anecdote (I hope they are reading Halcombe Hackney Norilsk henceforth). Meanwhile, Barack Obama said that whether Tuesday do not fit most Americans they could vote before that day something he has done. All in all, it is somewhat peculiar, yet perhaps many Americans feel proud of tradition though if there are many people who do not attend to the polls that day there is a clear reason to blame on.

KATY PERRY. WHY SUCH A DRESS?
At the end of this post you are to discover an amazing video of Katy Perry in which she is clad in a wholly special supporting dress. Here there is an anticipation of that. I hope you can wait on a little longer... 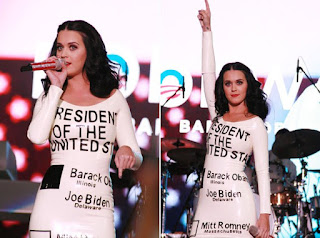 DONALD TRUMP. WHY SO MUCH HATE?
As everybody knows Donald Trump does not love Barack Obama so much, however, the offer the billionaire entrepreneur has made is somewhat strange. Where is the point? What does he want to prove?. Maybe harm Democrats? I am talking of Donald Trump´s recent video in which he offered 5 million dollars whether Barack Obama showed his University Records and passport,  the 5 million dollars would go to a charity of the election of the still president of the United States. You can enjoy the video right now. Donald Trump accuses Barack Obama of having made USA a weak and feeble country, something did not happen in the past. Furthermore, he dismisses Obama as the worst president ever.

Let Donald Trump explain himself. In addition, Does Donald Trump ever tried pot or any other kind of drugs? Why does he hate Obama so hard? You can discover these issues right now, David Letterman asked the wealthy tycoon about many interesting facts in a great interview. Is Obama dithering over his proposal? What do you think?

The British newspaper The Guardian (they are thinking of stop printing in paper something that would be very sad albeit that is other story) tried to obtain Donald Trump´s University records so that The Guardian phoned the offices Donald Trump has in New York City to get such certificates, do you want to hear what they got? You will find the incredible phone call in this link.

Well, everything Donald Trump does is always on the news, I think such powerful people can do anything they wish to like ask for the College´s records of the most important politician in the world. We will move from this mogul´s strange deeds and focus now on other exciting thing relating US Elections. Katy Perry showed her barrack for Barack Obama (today Halcombe is in a great mood) last week. KATY PERRY. The lovely pop star Katy Perry did an incredible performance last week. Before Obama´s speech in Nevada where Katy Perry´s grandma still lives she did render some songs showing her support to the president of the most important country in the world clad in a bizarre, yet amazing outfit in which you can see clearly what you should do in the next elections.It is really amazing, she starts with Obama´s favourite song ever."Let´s stay together" (By the way, this song was deemed the best of the Sixties by Rolling Stone magazine) Its author is Al Green Later on, Perry changed her dress and sang some famous songs of her own. Here you can watch the performance of her song "Teenage Dream" picked as one of the best published in 2010. After that, you have another video with the full performance in Nevada. Needless to say that such kind of dresses would prevent a lot of people from not voting on the 6th of November!!!

This performance can be deemed surprising and even dangerous as Katy Perry is a pop star who sells her music to a very wide part of population therefore her support towards Obama can make Romney´s supporters do not buy her music, it is something that for instance does not happen in Spain and perhaps is because musicians in Spain are more humble as far as the number of sales are concerned and also because politicians has even more power than in the States as if they do want they can forbid a musician or a band from playing in the town or region they rule. Never mind, Katy Perry´s performance is really imaginative and beautiful, her dress is somewhat original and makes all she wants in an incredible way. You can look her poll outfit right here. By the way, Katy Perry was celebrating her 28th birthday the following day.
Posted by Halcombe Norilsk
Email ThisBlogThis!Share to TwitterShare to FacebookShare to Pinterest