Eva Herzigova for Brian Atwood, pictures and video paying homage to Marilyn Monroe´s movie Something ´s got to give

"Marilyn Monroe: The final days" is a documentary published in 2001 that explains accurately everything related to the life and strange death of the bombshell actress Marilyn Monroe, as well as forgiven footage is released from an unfinished movie named Something´s got to give which was hidden within the archives of 20th Century Fox because of Marilyn´s tragic end. That movie shows the last moments of Monroe acting whose scenes are full of sensuality and beauty. Marilyn Monroe felt comfortable and decided to take off her clothes within a scene where she had to appear on a swimming pool, something that surprised many but now it has been revealed beautiful and artistic. Indeed, she was ahead of her time something Brian Atwood also believes... 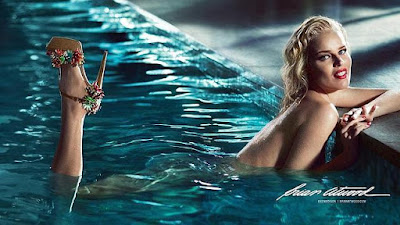 50 years later, the prestigious shoes brand Brian Atwood has signed Czech supermodel Eva Herzigova in order to promote its 2013 campaign but also to pay homage to Marilyn Monroe and the movie Something´s got to give, evoking the epoch whence Marilyn would star glamorous comedies full of witty. Something´s  got to  give is somehow mysterious, magical and joyful inasmuch as there were a lot of problems related to the movie, Marilyn Monroe was fired once and then signed again, there were lot of issues regarding the production, cast, script... the scenes from the Swimming pool ( as you can see at the end of this post) show an incredible actress at the height of her career, nevertheless there were only months left for her as she was found dead little later in a hot Summer night in one of the most saddest moments in the history of cinema. In that documentary, "Marilyn Monroe: The final days" you can discover what I am conveying and see the movie Something´s got to give that is unfinished. Brian Atwood was born in Chicago, after working 9 years in Italy for Versace, Atwood decided to launch her own label in 2001, becoming a recognized designer throughout the world due to his imaginative style. This last campaign has been done by the photographers Mert Alas and Marcus Piggot, the scenes were shot in London.  Even though last fall model Candice Swanepoel experienced how a commercial and some pictures for Brian Atwood were banned because of the excessive raunchy footage... Brian Atwood has decided to maintain its philosophy thus another evocative commercial has just been conceived Eva Herzigova therein, at 40 and expecting her third child the Czech model and former face of Wonderbra seems more gorgeous than ever and her talent fits perfectly in the commercial for Brian Atwood that you can enjoy here. Furthermore, Eva Herzigova resembles Marilyn Monroe to such a deep extent that we are transported to the golden age of classic Hollywood as a matter of fact.

Original footage from 1962 movie Something´s got to give


Marilyn Monroe at the pool on Something´s got to give

Hope you have loved this post Hot Fashion Campaigns and I kindly ask you to rate, share or comment if you love Eva Herzigova, Brian Atwood, Marilyn Monroe or at least this humble post.
Posted by Halcombe Norilsk
Email ThisBlogThis!Share to TwitterShare to FacebookShare to Pinterest