Diet of Christian Bale for The Machinist.

Differing from the masterpiece of Martin Scorsese Raging Bull where Robert De Niro (one of the idols of Christian Bale) gained and lost a lot of weight to perform the role and the legendary story of boxer Jack Lamotta alongside Joe Pesci or other stories based upon true stories (Matthew McConaughey not long ago) I truly believe Christian Bale did not really need to lose so much weight to shoot The Machinist. The diet of Christian Bale consisted of apples, coffee and canned tuna, he only ate these three kind of food for months losing therefore 28 kg somewhere in the region of 63 pounds (if my calculations are not wrong) just the same amount of weight  Robert De Niro gained to star Raging Bull but he obtained an Oscar though...

Diet of Christian Bale The Machinist
Christian Bale renders a perfect performance, however, so weak is the final part of the The Machinist that you have the same impression you may possess when you watch perfume commercials at Christmas, you believe you must buy the perfume but once you have them in your home you realise everything was a superficial figment of your imagination thus you did not need them by no means, yet you bought them anyway.

Christian Bale must love movies so hard to make this kind of performance, the role of a crazy factory worker, a sick, zany and strange man that has problems to get asleep and loses so much weight that becomes a bony body walking to the extreme of looking like a sick dead person hence the movie is not entirely recommendable with some many cases of people with eating disorder and anorexia these days. 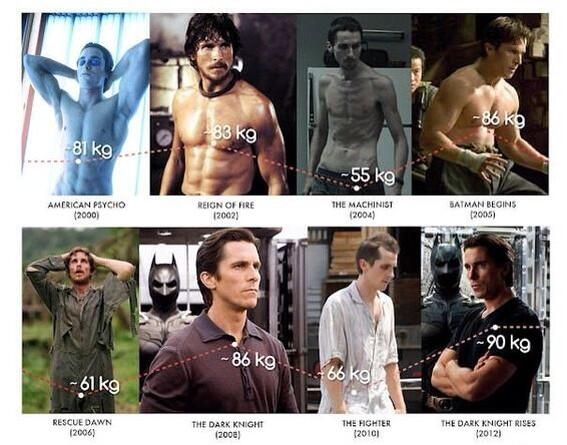 Christian Bale on The Machinist and his weight 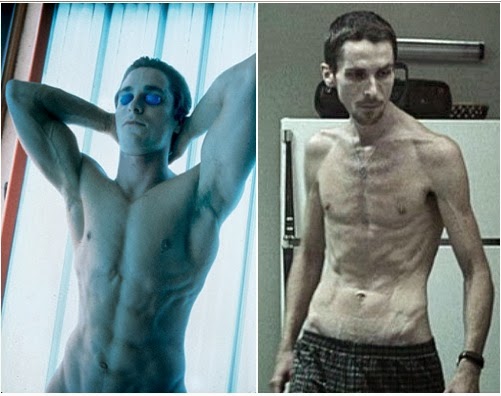 Christian Bale on The Machinist

It does bother me that The Machinist is far more famous because of the controversy of the weight and diet of Christian Bale than for any other aspect of it. The movie seems to pay homage to the films of Alfred Hitchcock and even another legendary Robert De Niro´s performance and movie Taxi Driver. Even though it starts in an interesting way it soon becomes an ugly disappointing experience.

The character of Christian Bale on The Machinist falls badly in a psychological game, he works in a factory has a lot of dreams and its intention is to deceive you. Nonetheless, all the tricks were a failure,  The Machinist did not make any success at the box office being snubbed by all Cinema Awards. It is much more famous because of Christian Bale´s performance rather than its quality or the plot, consequently, it does not worth it to put yourself on risk to act like a crazy guy on The Machinist that gives us a Christian Bale extremely thin on the verge of being seriously sick as a matter of fact. Diet of Christian Bale The Machinist It is interesting to have such a dangerous diet to make a movie like The Machinist that was a completely failure? It is not, above all with so many cases of sickness within our society that oblige us desperately to have a perfect image yet impossible to reach so that make us feel miserable in order to keep ourselves consuming and trying to get something that it is not real. Share, comment and rate if you have liked this post about the Diet of  Christian Bale and The Machinist
Posted by Halcombe Norilsk
Email ThisBlogThis!Share to TwitterShare to FacebookShare to Pinterest