Metallica From nothing to Through the Never.

Little could imagine the actual leader of Metallica, James Hetfield, what was going to experience incidentally the day he answered to an advertisement in a local newspaper of Los Angeles (The Recycler (as a curiosity other bands such as Mötley Crüe or Guns N Roses did also publish in the same newspaper ads looking for musicians to join their bands) issued the now drummer of Metallica Lars Ulrich, born in Denmark and son of a professional tennis player who despite seeking a career in the world of Tennis ended up creating alongside James Hetfield hard rock band Metallica.

James Hetfield Through the never. Metallica

Let alone when in 1986 Metallica suffered from a bus accident in Sweden thus the bass player Cliff Burton perished unfortunately (Cliff Burton oddly won a card game to Kirk Hamett  hence he chose the position to occupy in the bus they were travelling by that also was the reason of his death). Still, when in 2001 the bass player, Jason Newstead  who was the substitute of Cliff Burton, left the band as he was not given permission to start other musical projects of his own something that led James Ulrich to enter into a Rehabilitation Center while the rest of the members of Metallica take some time off away from the group that was far from having a good moment. This unbelievable Metallica trip has another stop, 2013 and the station is named Metallica 3D Through The Never. Metallica had always wanted to start a project within the world of cinema, yet in the 90s they let it down because of at that time too complicated technology as well as their lack of experience. After publishing a documentary that could be deemed as the group presentation to the people who are unknown to them Some Kind of Monster, they give us now a distinct project called Through the never. Inspiration came in part from best seller The Alchemist of the Brazilian writer Paulo Coelho, Metallica performed some concerts in a row of overwhelming characteristics, a huge statue  of 10 meters high was constructed epitomising Justice, a stage of ten metres long was built... the concert we are able to see was recorded in Vancouver and Edmonton during 5 days. Lights, lasers are from the biggest technology available, Through the never is recorded in 3D with the same James Cameron uses and was ceded  to Metallica by him.

Metallica Through the never

Amazing Metallica Through the never

Metallica Through the never is directed by Nimród Antal. The plot of the movie may be secondary although it is interesting to remember it, a guy (actor Dane DeHaan)  that works for Metallica (his name says it all Trip) has to deliver a parcel to a truck driver, what seemed an ordinary job turns out to be a kind of nightmare and the boy  is involved in an amazing journey as he will fight for survival with monsters, zombies... everything overlaid with the music of Metallica that involves the film from beginning to end.

SONGS CHOSEN BY METALLICA TO THROUGH THE NEVER.
The majority of reviewers have praised Through the Never, important publications such as Rolling Stone or The Guardin have written positive lines, on the other hand, one of the most criticable of this project is The Daily Telegraph newspaper 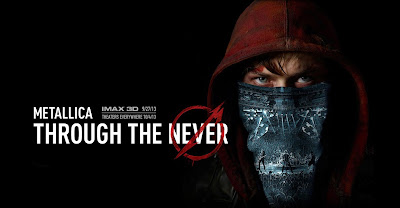 Metallica movie Through the never

Negative reviewers point out Metallica fulfils its commercial position and its domination place in the rock world but they also show us they are still at a its highest peak being able to surprise us dazzling in a breathtaking project. Metallica show that Trip´s journey is amazing as its concerts are and by the way its brilliant history.

MASTER OF PUPPETS LIVE FROM METALLICA THROUGH THE NEVER

THE DISCOGRAPHY OF METALLICA