If you want to know deep facts regarding the life, career and persona of Donald Trump in detail you must read this analysis I wrote Donald Trump about Donald Trump, yet this post is not to be boring at all contingent upon the fact I discovered Trump is one of the few men who have been on the cover of Playboy Magazine, I have therefore decided to write these lines with that historical cover. 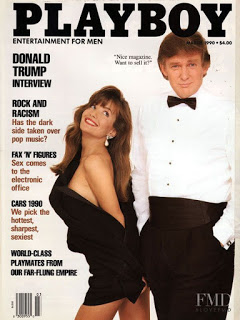 Times have changed so dramatically that Playboy Magazine does not longer feature naked women on the magazine. Still, the front-runner of the Republican party is Donald Trump who at 69, with no political career nor experience and against everybody both inside Republican and Democratic party is the front-runner, has been leading polls since August and has resulted victorious in the following states, New Hampshire, South Carolina, Nevada, Vermont, Tennessee, Virginia, Arkansas, Alabama, Georgia, Massachusetts, Kentucky, Louisiana, Michigan, Mississippi and Hawaii thus far, if you want to know further details (really interesting indeed) follow this link Donald Trump if not, you at least would have discovered the Playboy cover of Donald Trump one of the first and perhaps only man to appear on it. What do you think?. Lastly, it has been reported ancestors of Donald Trump changed the now renowned surname as in the past it was Drumpf as the family came from Germany. Is Donald Trump to be the next president of United States? Do rate, share and comment. Why US elections are always on Tuesday?You can discover it following this link US Elections
Posted by Halcombe Norilsk
Email ThisBlogThis!Share to TwitterShare to FacebookShare to Pinterest