As a diehard fan of the Rolling Stones and Rolling Stone magazine I must point out (even though it can be late) that the late Rolling Stone magazine number 1246 is too polite with Keith Richards, he does not need it nor The Rolling Stones. Does not sound Trouble (the best track from his latest solo album Crosseyed heart) like many other Rolling Stones songs? Is Paul McCartney doing worse than the Stones as Kiz may imply? Does not sound his anecdotes already told a zillion times before? There are far too many new artists and emergent stars who deserve a cover more than Keith Richards again let alone when he is talking about the same stuff one more time.

Keith Richards All down the line 1246 issue 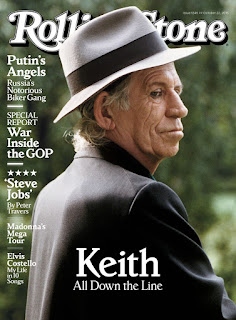