The excruciating rumour about Marisa Tomei because of her Oscar-winning movie My cousin Vinny. The rumour about the Academy Award that Marisa Tomei obtained is excruciating but perhaps is even more painful to actually see the performances of Joe Pesci in such  fabulous movies as Raging Bull, Goodfellas or Casino and subsequently watching him on the movie My Cousin Vinny.


MARISA TOMEI
I have always heard the story that tells of the man ( actor Jack Palance) who was in charge of presenting the Academy Award for the best-supporting actress on the edition of 1992 that said  Marisa Tomei by mistake because he was heavily drunk, instead, he should have pronounced the name of Vanessa Redgrave, something that would be a scandal and has never been proved indeed. Even in one of my favourite television programmes, Family Guy, the matchless and extremely cultivated in cultural terms Brian Griffin says: "I am capable of the most incredible miracles"  and then we see the images of Marisa Tomei winning the Oscar. 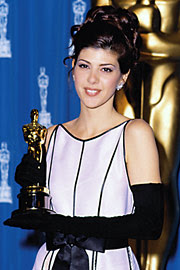 Marisa Tomei and her Oscar

Talking of the movie, I want to clarify that nobody should believe the given statement that says My Cousin Vinny is a pure reflection of the American Judicial System, The RainMaker directed by Francis Ford Coppola and starred by Matt Damon does. My cousin Vinny is a minor comedy with the only interesting aspect to discover if that cursed Academy Award ended up in Marisa Tomei´s hands fairly.

My cousin Vinny is a boring flick, intended to be funny but it is not at all. 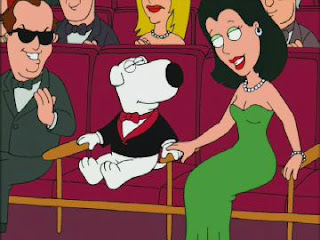 Even though is quite true that the other nominees were good actresses and My Cousin Vinny is a  middling movie, it is far too vile to doubt of the talent of Marisa Tomei, in fact, if she cannot have that award why then she did receive an Oscar nomination that year, in 2001 and 2008?. I do not believe an actress can obtain three nominations accidentally!!
Marisa Tomei is an excellent actress that has proven her talent in many movies, this is more real than the proper spectacle of the Academy Awards, it is assumed that a nomination is a winning already because getting the Oscar depends on many variables if not, you only have to scrutinise what happens to Harvey Weinstein, actor, actress, director or movie he supports....

In 2010 he decided to favour The King´s Speech when The Social Network was going to be the winner (as it had happened before at Golden Globes Awards and Baftas) However, the unfairness everybody knows did take place.

Does Marisa Tomei deserve to be the Best supporting actress for My cousin Vinny? I have not seen the other performances nor the other movies nominated. Did Penélope Cruz deserve to win an Oscar with Vicky Cristina Barcelona? (that year Marisa Tomei did receive a nomination because of The Fighter) Did Shakespeare in love deserve to be the best movie of the year 1998?.
Marisa Tomei received an Oscar nomination for her performance on The Fighter, directed by Darren Aranofsky and starred by Mickey Rourke

I strongly hope the main protagonist of this post can read this piece of writing and the reader will never see My cousin Vinny (the latest is said seriously).

By the way, Penélope Cruz and Shakespeare in love were introduced and backed in Hollywood by Harvey Weinstein and if you decide to bet on the Oscars make sure you know who and which movies Harvey Weinstein uphold. Does Marisa Tomei deserve to have an Academy Award as best Supporting actress? OF COURSE!!!  (unless Harvey Weinstein said otherwise...)
Posted by Halcombe Norilsk
Email ThisBlogThis!Share to TwitterShare to FacebookShare to Pinterest