When everything seemed some kind of strategy so that improve Miami Heat  squad or to earn so much more money it has turned out to be an historical come back. Lebron James is not to play in the famous city of New York, he is not to play with Kobe Bryant either and he is not to break more records with Miami Heat. Lebron James moves back to his natal state Ohio. He is to play again for Cleveland Cavaliers with whom he did play a NBA final against San Antonio Spurs. Notwithstanding the humiliating final score (4-0) only to have played a NBA final with a loser team like Cleveland Cavaliers was remarkable and awe-inspiring.

At first, I thought that the decision of Lebron James was a crazy one, yet little by little I foresee that Lebron James can achieve something memorable as NBA Eastern Conference is not so close as Western Conference is. Indeed, Miami Heat loses all its potential without Lebron James. Furthermore, Cleveland Cavaliers has chosen Andrew Wiggins as its 1 Draft pick who has a real potential. Still, Cleveland Cavaliers own some young talented players and its new coach it is a real winner, David Platt, who has a positive record and has also won last Euroleague title with Maccabi Tel Aviv of Israel. Lastly, Cleveland Cavaliers are close to sing a great player like Kevin Love from Minnesota Timberwolves. 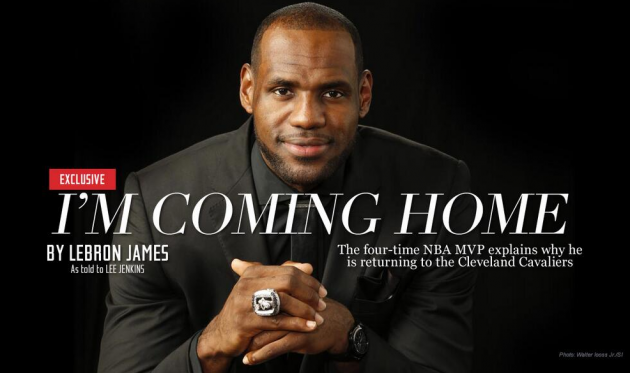 If Lebron James is capable of giving his state of Ohio a title back (they are famous of being losers and Ohio has only won a major sports title and it was 50 years ago. Besides, this state does not have great times because it depends heavily on car industry and Obama had to assembled a bailout that must be repaid as Ohio did have huge economical losses) Lebron James can deliver a riveting story worth of Hollywood, a poor guy who triumphs in the city of his modest state only to betrayed his compatriots, soon thereafter, he is a sort of hated outlaw as he is heavily hated on Ohio. Later on, achieves great success in a rich city like Miami and unexpectedly comes back to home to give splendour to otherwise a middling basketball team after suffering eternal humiliations that have been lasted for decades. This screenplay is loved by Lebron James. What is more, he could overcome Michael Jordan in personal terms as Air Jordan  did always have great players behind him like Scottie Pippen. However, is Lebron James really going to win a NBA Title with Cleveland Cavaliers? As far as Lebron James is concerned, there is no shortage of talent nor money as he is a free agent he is to earn a hefty sum of 90 Million dollars within the next 4 seasons. Lebron James. Time will tell. Genius are like this.

LEBRON JAMES THE DECISION
Back to 2010, Lebron James announced his decision of leaving Cleveland Cavaliers in order to play for Miami Heat within a national television programme to proclaim it, he became thereby the most hated NBA player ever.