Drinking Tea. George Mikes, How to be an alien

Regarding the text “Drinking tea” I do believe it is a droll article as it conveys in a funny way what British people are believed to be like. It is assured they always follow their traditions however strange they must seem. Likewise, even though they will not express it deliberately they stick to their ideas until they convince you they are right albeit everybody else says otherwise. In fact, tea was not invented in Britain, yet people relate it to the United Kingdom. What is more, they have a great sense of humour, rather ironic but also they make laugh of themselves shamelessly, this is why this text express Britishness perfectly. Despite globalization or the Internet Age I do not consider the text old-fashioned at all, traditions that display their distinction will always be there. Indeed, newest British political Party is Ukip, if they read it they may like it…

ORIGINAL TEXT
TEA by George Mikes,  an Hungarian born writer, author of many books, his most famous one, How to be an alien about life in Great Britain. 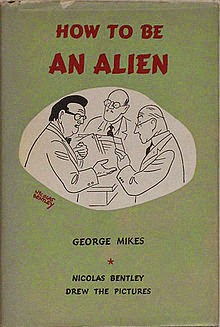 Tea, How to be an alien, about Britain and British people, George Mikes

TEA
The trouble with tea is that originally it was quite a good drink. So a group of the most eminent British scientists put their heads together, and made complicated biological experiments to find a way of spoiling it. To the eternal glory of British science their labour bore fruit. They suggested that if you do not drink it clear, or with lemon or rum and sugar, but pour a few drops of cold milk into it, and no sugar at all, the desired object is achieved.
Once this refreshing, aromatic, oriental beverage was successfully transformed into colourless and tasteless gargling-water, it suddenly
became the national drink of Great Britain and Ireland - still retaining, indeed usurping, the high-sounding title of tea
There are some occasions when you must not refuse a cup of tea, otherwise you are judged an exotic and barbarous bird without any hope of ever being able to take your place in civilised society. If you are invited to an English home, at five o'clock in the morning you get a cup of tea. It is either brought in by a heartily smiling hostess or an almost malevolently silent maid. When you are disturbed in your sweetest morning sleep you must not say: 'Madame (or Mabel), I think you are a cruel, spiteful and malignant person who
deserves to be shot.' On the contrary, you have to declare with your best five o'clock smile: Thank you so much. I do adore a cup of early morning tea, especially early in the morning.' If they leave you alone with the liquid, you may pour it down the washbasin. Then you have tea for breakfast; then you have tea at eleven o'clock in the morning; then after lunch; then you have tea for tea; then after supper; and again at eleven o'clock at
night. You must not refuse any additional cups of tea under the following circumstances: if it is hot; if it is cold; if you are tired; if anybody thinks that you might be tired; if you are nervous; if you are gay; before you go out; if you are out; if you have just returned home; if you feel like it; if you do not feel like it; if you have had no tea for some time; if you have just
had a cup... (it continues but my piece of work does not) do share, rate and comment.
Posted by Halcombe Norilsk
Email ThisBlogThis!Share to TwitterShare to FacebookShare to Pinterest