Our beloved Victoria´s Secret Angel, the gorgeous South African model Candice Swanepoel a harbinger of beauty, style and charm, star of the most popular post Halcombe Hackney Norilsk has ever written, has been selected to be in charge of wearing an unique impressive bra on November 13th in New York City within the annual  Victoria´s Secret Fashion Show that will be aired on Television December 10th, the attributes of this special outfit are somewhat astounding in the sense that it is made of 52-carat pear-shaped ruby which dangles from the bra's centre, as well as 4,200 other precious stones, including diamonds, yellow sapphires and more rubies, all set in 18-karat gold. It is valued at ten million dollars. Candice Swanepoel herself posted on Twitter a picture of the design becoming the second most expensive bra ever worn by a Victoria´s Secret model after the one Gisele Bundchen wore in the year 2000 that cost 15 Million dollars. Last year it was Alessandra Ambrosio who carried a special outfit and the year before it was Miranda Kerr who had such a privilege. Nevertheless, none of them wore such an expensive bra like the one Candice Swanepoel is to show something that makes this occasion somewhat special. Indeed, two bodyguards are custodian of this bra as you can see in the video that I have added below. Still, they had to make a mold of the body of Candice Swanepoel, besides, she also revealed they ought to wear gloves when touching it. Mouawad is the Jeweller and responsible of making the bra that will leave us speechless the day 2013 Victoria´s Secret Fashion Show takes place. 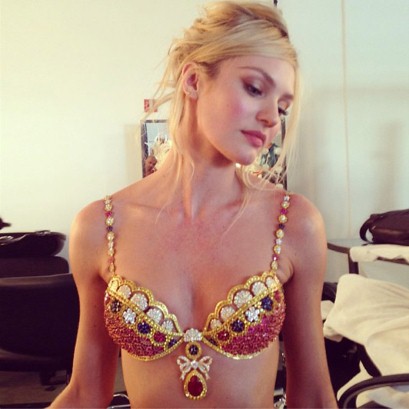 Stay tune as we will tell of such an incredible event. Now you can see the special bra Miranda Kerr and Alessandra Ambrosio worn at Victoria´s Secret Fashion Show in the past. By the way, these two models appear on the 2014 Pirelli Calendar Remember there are plenty of other fashion stories in this blog with the best models in the world therein.