The Girl with Sienna Miller as Tippi Hedren

Movie The Girl with  Sienna Miller as Tippi Hedren and Toby Jones as Alfred Hitchcock about the relationship between them and the movies Marnie and Birds.


Wow!! Is this the real Alfred Hitchcock? When somebody perishes immediately enters heaven (at least the first days) and if she/he was famous or a relevant filmmaker even more. Without going any further, we can see right now a brand new biopic about Steve Jobs, albeit the most ambitious project is the one Aaron Sorkin is to write, experts on the job and live of Steve Jobs believe it seems as if the Apple genius were somewhat a saint when he was not in reality therefore the stories we hear about famous people are far-fetched. In essence, it is extremely outrageous to discover the true personality of the master of suspense, Alfred Hitchcock, married all his life, felt extremely attracted to some of the female protagonists of his movies thus he could no forgive them their refusals Grace Kelly, Ingrid Bergman, Janet Leigh and on this occasion Tippi Hedren.
Sienna Miller and Toby Jones, Alfred Hitchcock and Tippi Hedren.

Nonetheless, the only one actress that has been critical of the British Director is Tippi Hedren as  others actresses such as Kim Kovac or Doris Day have praised and defended Hitchcock, perhaps he only got mad about the grandmother of the future female protagonist of 50 Shades of Grey, who was obliged to be exclusively under his rule to the extreme she says Hitchcock destroyed her filming career, drive her to despair, was a misogynist and overly dangerous as Alfred Hitchcock was completely crazy 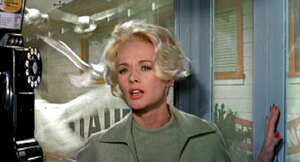 The Girl explores this problematic relationship, fascination and obsession and we are able to discover everything Tippi Hedren suffered from while filming two famous Hitchcock´s movies Birds and Marnie.


In any way, Toby Jones makes a great performance acting as Alfred Hitchcock and Sienna Miller that was supposed to triumphed at the beginning of her filming career, renders one of her finest performances although The Girl is a movie intended only for Television, we hope she can be back in an important Cinema project because her movie career seemed very reliable when she appeared on Layer Cake or Alfie for instance, but she has become another unfulfilled star to date.

The Girl is a short movie but it is worthy inasmuch as you can see two splendid performances and it is very interesting to discover the true personality of Hitchcock, the human side or perhaps the side we are told to believe because it is only focused on the two movies Tippi Hedren made with him. Many people has critized severely this movie deeming even it as a failure or mistaken.

In my opinion, more than the quality or the failures of the movie The Girl its biggest problem is that the story can no go further, it is focused on the relationship of the British filmmaker with the erstwhile model thus there are not many more aspects to talk about. Similarly, I do not truly think Tippi Hedren has the necessity of saying awful lies about Alfred Hitchcock therefore at least somewhat true we are to see. Was  Alfred Hitchcock really so obsessed with blondes or was it what movies demanded being only an artistic obsession? Nobody can clarify now this question however The Girl presents you two great performances and the real personality to some extent of one of the biggest personalities within the history Cinema Alfred Hitchcock.

Wow!! Is this the real Alfred Hitchcock?