The Eccehomo botched fresco of Borja as its priest faces scandal

FAMOUS ECCEHOMO PAINTING, A PRIEST AND A SEXUAL SCANDAL
In August, 2012 news exploded, Borja, a little town inside the province of Zaragoza, in the region of Aragon within Spain was all around the world.

A local female churchgoer had offered herself to restore a religious painting called Eccehomo, so peculiar was the result of the botched fresco that it appeared everywhere. Even foreign mass media paid attention to what was happening, relevant newspapers like The Guardian or famous tabloids like The Sun wrote about it. 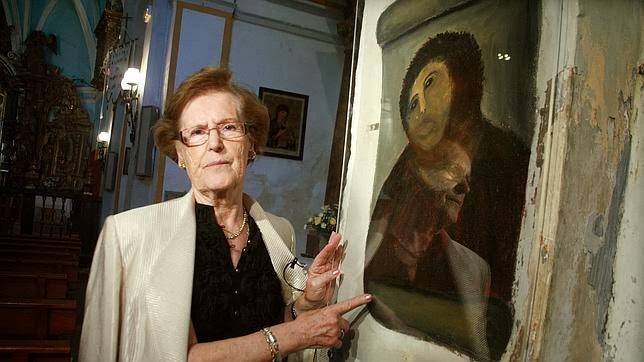 What is more, the American late night television programme of Conan O´Brien made a spoof based on the episode. Still, one of the most well-know television programmes ever, renowned Saturday Night Live  rendered a particular homage to the episode that  travelled all around the world. "Ecce homo" expression means Behold the man and was used by Poncious Pilate. 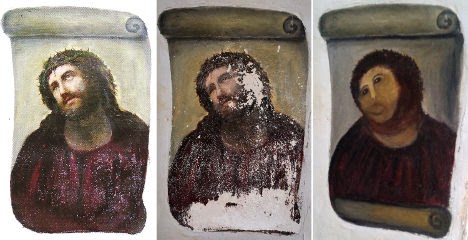 Eccehomo and a sexual scandal

Cecilia Jiménez, the author of the restoration did have a serious bad time because she did not expect such huge dimension regarding her painting, she did only want to help and now her Eccehomo restoration was everywhere.

Little by little,  fun was fading away and the episode turned out into something serious as thousands and thousands of tourists travelled to the Sanctuary of Mercy church of Borja in the province of Zaragoza close to El Moncayo in order to see the picture named Eccehomo. Everybody wanted a picture of the botched fresco. 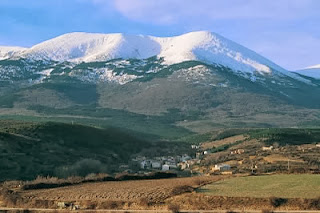 When you enter into the Sanctuary of Borja to see the Eccehomo you did have to give some money away, one euro is requested, the money was going to contribute economically to the development of the village. Cecilia Jiménez wanted to give the money to charities.

Abide by the episode the painter was so popular that she broadcast on television the celebrated Spanish tradition of eating twelve grapes at New Year´s Eve.  Her painting was a new tourist attraction. For instance, the local wine (Campo de Borja) relevant product of this province had some bottles labelled with the Eccehomo figure of Cecilia Jiménez. A star had been born. 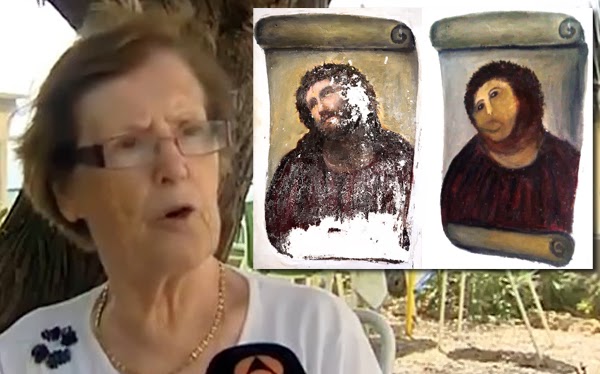 Now, everything is back to  headlines, yet because of gloomy news, the parish in charge of guardianship the famous painting Eccehomo has been jailed recently, at first, he was accused of stealing the money collected to see the botched fresco but Local Authorities have assured it is not true, the money was going to fund a care home and it is lower than the money the priest is reportedly to have stolen (somewhere in the region of 200 000 Euros).

Moreover, the religious is accused of sexual abuse and money laundering. He was jailed in Tarazona close to El Moncayo in the same province of Aragon. The operation is called Hawthorne by Central Government.

There was a local concentration so that support the priest who has been decades working on that village and was known as a generous, kind person but the accusations are so severe and the police operation so visible that we have to be careful about the whole issue.

The latest is that the priest has abandoned jail but he has been expelled from the Church for some time. Experts on the subject point out the parish was blackmailed by some people, they requested the parish a lot of money money, if he refused to do so they would publish some sexual videos of the priest with male companion hence the Eccehomo cleric stole money from the Church in order to pay the sum. Now, a legal process has started nevertheless, in consequence, we will have to wait to know the whole story completely. 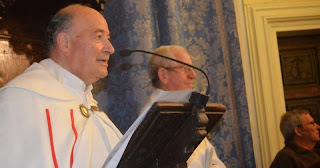 Sexual Scandal and the priest of Eccehomo painting

This thorny matter has brought notoriety to the Eccehomo painting of Borja again, we hope the affection people had for Cecilia Jiménez, the restoration and this Zaragoza village on northern Spain will be maintained without misting up the funny story of Eccehomo botched fresco. What do you think? Share, rate and comment.
Posted by Halcombe Norilsk
Email ThisBlogThis!Share to TwitterShare to FacebookShare to Pinterest